An image that appears to show a canal in Venice laden with lotus blossoms has been shared hundreds of times in multiple Facebook posts. The posts, however, lack context; the image was created by a graphic artist and the lotus blossoms were digitally inserted into the image.

The image has been shared more than 700 times since it was published on Facebook here on February 22, 2021. 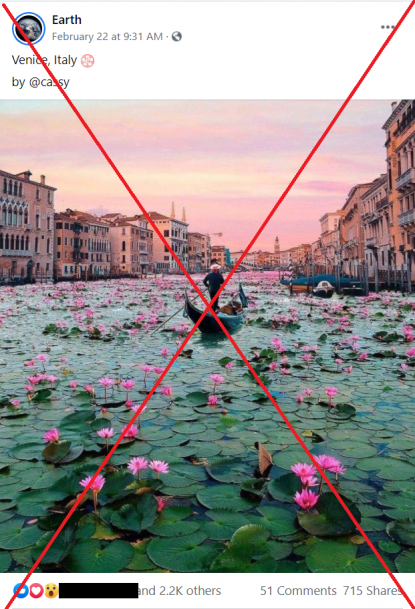 Other Facebook users appeared to believe the image was a genuine photograph, posting comments such as “Would love love love to go here” and “This is amazing- one of the wonders”.

The posts, however, lack context.

A reverse image search found that the lotus blossoms were digitally inserted into the image, which was created by a graphic artist named Robert Jahns.

Jahns posted the image on his Instagram page here on June 22, 2020. The post’s caption reads: “Blooming canals of Venice”. 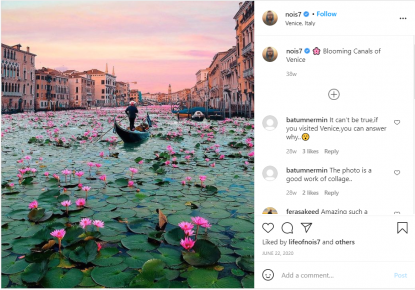 As noted on his website, Jahns is a digital artist with a “unique approach to photo manipulation” that aims to “marry people, nature and movement in ways that seem alive, yet surreal, all at once”.

Below is a screenshot comparison between the image shared in the misleading posts (L) and the image from Jahns’ Instagram (R): 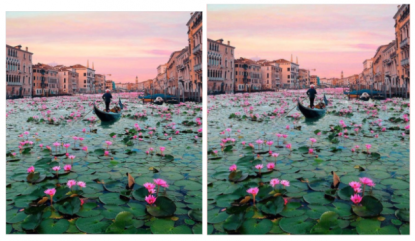 The image was also published with proper attribution on Architecture & Design’s Facebook page here, on Pinterest here and is listed for sale on Lumas here.