Multiple Facebook and Twitter posts have shared a photo that they claim shows Indian politician Mamata Banerjee walking out of a wheelchair, suggesting she faked a leg injury sustained while campaigning in March 2021. The claim is misleading: the photo originally appeared in a satire page; it had been digitally altered to combine two images of Banerjee from before and after her campaign mishap.

The post's Hindi-language caption translates to English as: “Salute to the miracle. Is she Mamata Banerjee or the black magic of Bengal? She broke her leg, cried a lot, did so much drama and today she got off the wheelchair and walked into her car herself.” Banerjee, incumbent chief minister of West Bengal, sustained a leg injury on March 10, 2021 while campaigning for an upcoming election in the eastern Indian state.

She fell out of her car due to an altercation in the crowd that had gathered around, local newspaper The Indian Express reported.

Voting kicks off March 27 in West Bengal, home to more than 90 million people and which Banerjee has ruled for a decade, AFP reported.

Comments to the post indicate people were misled and thought the photo was genuine.

One Facebook user called Banerjee a “terrible liar” while another described the whole episode as a “drama”.

“Didi would have been fine today if there were a good photoshopper,” the caption of the Twitter photo states in Hindi.

Banerjee is popularly addressed as Didi - elder sister in Hindi and Bangla  - by the local media and her supporters.

The Twitter photo was digitally altered to combine two images of Banerjee that were taken before and after her leg injury.

The first original image that shows Banerjee walking appears in a report published by the English-language newspaper Hindustan Times on June 7, 2012. The photo caption reads: "West Bengal CM Mamata Banerjee lashed out at Union home minister P Chidambaram on Friday for his comment on the rising political violence in Bengal, the day before."

The other original image that shows her coming out of a hospital in a wheelchair appears in a more recent Hindustan Times report on March 12, 2021, after her campaign mishap. Its photo caption reads: "West Bengal chief minister Mamata Banerjee is wheeled out after being discharged from the SSKM Hospital in Kolkata on Friday. (ANI PHOTO)."

Below is a screenshot comparison showing the doctored photo (L) and their corresponding source photos from Hindustan Times(R): 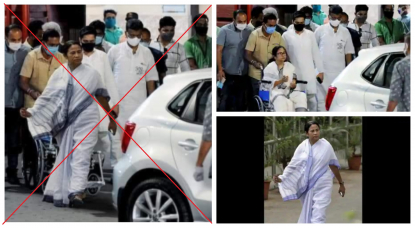 Video reports aired by local media organisations NDTV and ABP News show Banerjee was in a wheelchair following her leg injury in March 2021.