Skip to main content
Supporters of US President Donald Trump march during a rally in Washington, DC on November 14, 2020. (AFP / Andrew Caballero-Reynolds)

A photo shared thousands of times on Twitter and claimed to be from a November 14, 2020 rally in Washington, DC to support President Donald Trump after his election defeat is in fact a two-month old image from a flea market in Pennsylvania.

“So the Million Maga March isn't even a #MillionMoronMarch....It's a few hundred extremists and Proud Boys, and a few "entrepreneurs" selling fascist/racist gear.....” says a November 14, 2020 tweet that shared the photo and was liked more than 2,000 times. 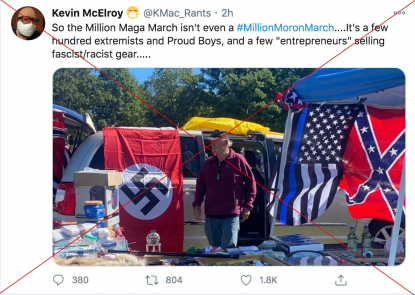 The image shows a man next to a vehicle and what looks like a stall displaying merchandise including various flags. A Confederate battle flag can be seen on the far right of the image, next to the "thin blue line" flag in support of law enforcement, as well as a Nazi flag on the left.

Similar claims can be found on Twitter -- here, here, and here -- and Facebook, here, here and here.

But the photo of the stall was not taken in the nation’s capital at the rally by thousands of Trump supporters, who received a drive-past from the president's motorcade before he headed to his golf club.

AFP Fact Check found through a reverse image search that the photo is a couple of months old, taken at a flea market in Pennsylvania.

The photo was originally posted in a tweet on September 5, 2020. “These images make me sick. At a flea market hosted by the Braddock Inn in Farmington, PA a vendor is selling nazi stamps and a large swastika is displayed,” Sam Vinograd, CNN national security analyst, wrote on Twitter. 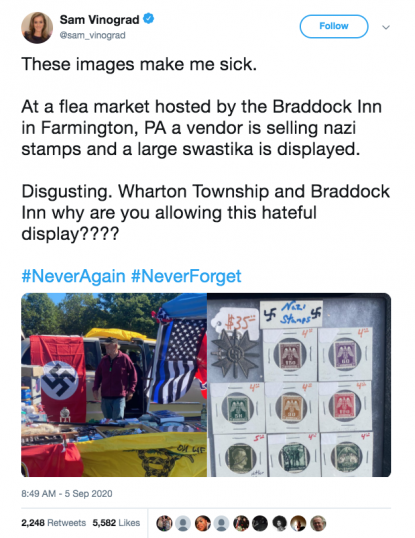 A screenshot of a tweet with the original photo posted on September 5, 2020

The flea market incident was also reported in local news, here -- where the same stall is seen in a photo from a different angle.

The pro-Trump gathering sparked conversations on social media between anti-Trump and pro-Trump groups, one week after Joe Biden’s projected win in the 2020 presidential race. The hashtags #MarchForTrump and #MAGAMillionMarch were trending on Twitter, while #MillionMoronMarch was used to oppose the rally.

Trump supporters, some of them draped in American flags and other patriotic gear, waved blue “Trump 2020” flags and others including the “thin blue line" banner. They shouted “We love Trump,” and “Stop the steal,” in reference to claims of mass electoral fraud falsely made by Donald Trump.

With right-wing group the Proud Boys also attending, a large security presence was deployed to prevent clashes with anti-Trump events in the city. There were a number of scuffles and 10 arrests, but no major violence had been reported.

AFP did not report any sightings of the Nazi flag at the rally.