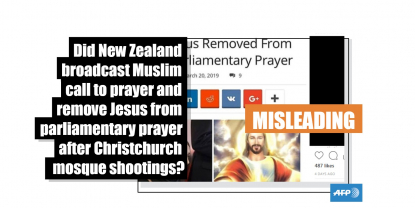 Published on Thursday 28 March 2019 at 04:00
Posts shared thousands of times on Facebook, Twitter and Instagram claim that New Zealand will broadcast the Muslim call to prayer nationwide and remove Jesus from its parliamentary prayer in response to the Christchurch mosque shootings. The claim is misleading: the country did broadcast a call to prayer on March 22, after 50 people were killed in the Christchurch shootings on March 15, however references to Jesus in the parliamentary prayer were removed in late 2017 and not in response to the mosque attacks.
Read more 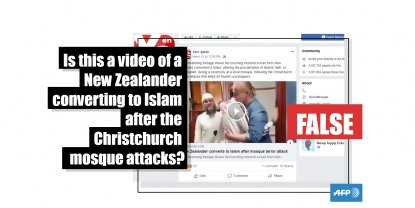 Published on Monday 25 March 2019 at 09:30Updated on Wednesday 12 June 2019 at 04:55
Multiple Facebook posts have shared a video or a screenshot from the video that they claim shows a man from New Zealand converting to Islam following a terrorist attack on two mosques in Christchurch on March 15, 2019. The claim is false -- the original video shows an event at a mosque in Denmark and it has circulated online since at least September 2018.
Read more