Multiple Facebook posts have shared a video or a screenshot from the video that they claim shows a man from New Zealand converting to Islam following a terrorist attack on two mosques in Christchurch on March 15, 2019. The claim is false -- the original video shows an event at a mosque in Denmark and it has circulated online since at least September 2018.

The misleading video and claim was posted here on the website of Yeni Safak, a Turkish newspaper, on March 20, 2019.

Yeni Safak also shared the video and claim on their official Facebook page here, which has more than nine million followers.

The caption says in English: “Heartwarming footage shows the touching moment a man from New Zealand converted to Islam, uttering the proclamation of Islamic faith, or Shahadah, during a ceremony at a local mosque, following the Christchurch terror attacks that killed 50 Muslim worshippers.” 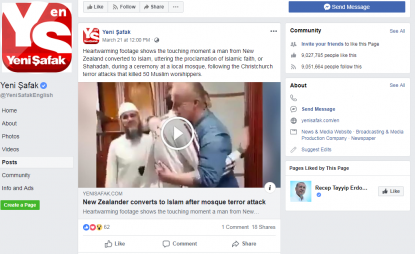 Multiple other Facebook pages shared a screenshot of the video and the same claim, for example here on March 20 on a page entitled ‘Revert to Islam’ which has more than 833,000 followers, and here and here.

The same video was shared here on March 19 with a caption in Croatian saying: “Another conversion to Islam in New Zealand”. It has been viewed more than 63,000 times.

The posts were shared less than one week after 50 worshippers in two mosques were shot dead in the city of Christchurch, New Zealand. An Australian man has been charged over the murders. Here is an AFP report from March 20 about the incident.

But the original video was actually filmed in the Wakf mosque in Denmark’s capital, Copenhagen.

The video has circulated online since at least September 30, 2018, when it was posted here on a Facebook page with the caption: “Welcome back our brother from Denmark. Subhanallah AlhamdoAllah for Islam”.

The searches found multiple videos on the official YouTube channel for the Wakf mosque in Copenhagen which showed the same interior as the video in the misleading Facebook post. The videos can be seen here, here and here.

Here is a screenshot comparison of one of these videos next to the video in the misleading Facebook post:

An image tagged to the mosque’s location on Google maps also corresponded with the interior of the mosque seen in the video included in the misleading post.

Here is a screenshot of the image: 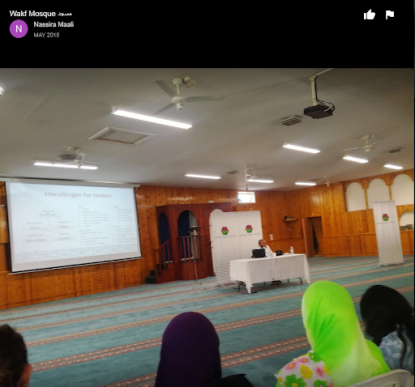 Bilal Assad, press secretary for Islamisk Trossamfund (the Islamic Society in Denmark), which runs the Wakf mosque, said the video was an old clip showing the mosque in Copenhagen.

“We deeply regret that anyone would use this video out of its context and especially to spread this type of misinformation in the wake of the horrible tragedy in New Zealand.” Assad told AFP in an emailed statement.

UPDATE: On June 11, 2019 Yeni Safak issued a correction on their Facebook page saying: "It was previously reported that the event took place in New Zealand in the aftermath of the Christchurch mosque terror attack, but has since been corrected to reflect that. Yeni Safak would like to apologize to its readers for this error."