No, terror attacks have not killed 'zero' civilians in Indian cities under Prime Minister Narendra Modi

A graphic shared in multiple posts on Twitter and Facebook claims no civilians have died in terror attacks in Indian cities since Prime Minister Narendra Modi came to power in 2014. The claim is false; more than 1,400 civilians have died in "terrorist/insurgent/extremist incidents" across the country from 2014 to 2018, according to official statistics, which do not give a breakdown of whether the incidents occurred in rural or urban areas. Government ministers have also described two deadly attacks in urban areas during Modi's first term in office as "terrorist" incidents.

The graphic was shared on Twitter here on January 17, 2019 with a caption saying: “Single biggest reason for me to be satisfied with this regime #5YearChallenge Grateful to PM”. 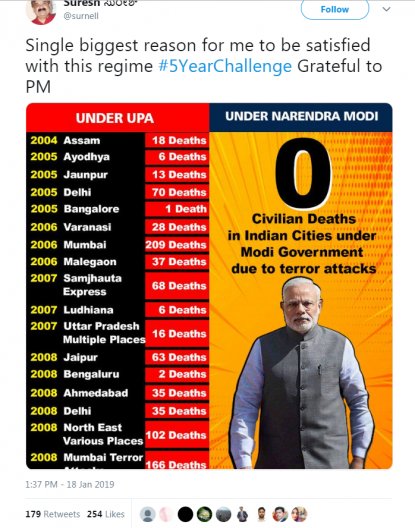 It was also shared on Facebook here on January 18 and here with a caption saying: "From 2004 to 2014. Terrorist attacks were 975. From 2014 until today. There is no terrorist attack anywhere."

The graphic in the photos contains a table which purports to compare the number of civilian deaths in terror attacks from 2004 to 2013 when the United Progressive Alliance (UPA) was in power with the 2014-2019 first term of Prime Minister Narendra Modi's Bharatiya Panata Party (BJP) government.

The left-hand column lists 24 incidents across India which it states resulted in a total of 975 civilian deaths due to terror attacks. No data sources are provided for the figures in this column, therefore AFP was not able to verify how the total figure was reached.

The right-hand column contains the caption: “0 Civilian Deaths in Indian Cities under Modi Government due to terror attacks” above an image of Prime Minister Narendra Modi.

The post comes ahead of general elections in India starting on April 11, which will see Prime Minister Narendra Modi and the BJP seek a second term.

Here is an AFP report on the announcement of the elections.

Last month the Minister of State for Home Affairs, Hansraj Gangaram Ahir, was asked in parliament to provide "the number of terrorist incidents that have taken place in the country from the year 2014 till now along with the loss of life and property reported therein."

In response to the question, the minister provided statistics that showed 1,482 civilians were killed between 2014 and 2018 in what the government classified as "terrorist/insurgent/extremist incidents".

The figures do not give a breakdown of whether the incidents occurred in rural or urban areas.

Below are screenshots of tables provided by Ahir in his written reply to a question in the Rajya Sabha on February 5, 2019: 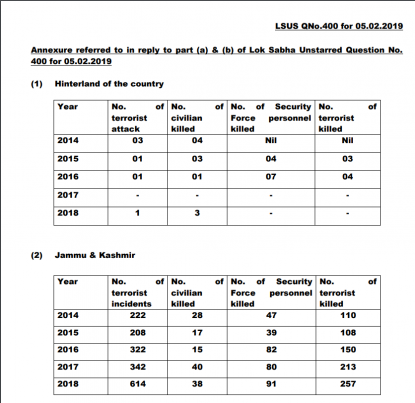 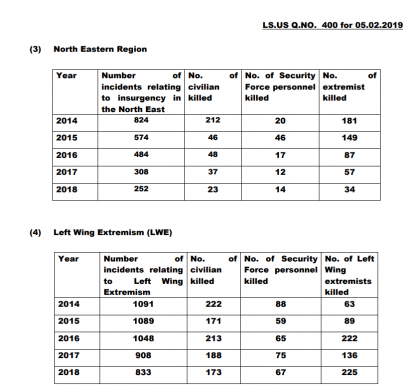 A bombing outside a restaurant in the southern city of Bangalore in December 2014 claimed the life of one woman. Here is an AFP report on the incident.

In August 10, 2016 a parliamentary question asked Minister of State for Home Affairs, Hansraj Gangaram Ahir to provide: "the number of incidents of terrorism occurred during the past three years and the number of people died and injured therein".

In his official written response to the question, Ahir, provided a table which included the blast in Bangalore on 28 December, 2014.

Shujaat Bukhari, the editor of the Rising Kashmir newspaper was shot dead by gunmen in Srinagar, the summer capital of Jammu and Kashmir in June 2018. Here is an AFP report on Bukhari's funeral.

The Chief Minister of Jammu and Kashmir state at the time of Bukhari's death, Mehbooba Mufti, described the killing as a terror attack in a tweet.

Terrorism has hit a new low with Shujaat’s killing. That too, on the eve of Eid. We must unite against forces seeking to undermine our attempts to restore peace. Justice will be done. https://t.co/8oCNXan13L

A March 7, 2019 grenade attack on a bus stand in Jammu, the winter capital of Jammu and Kashmir, injured 18 civilians. Here is an AFP report on that attack.

This report by Indian news site The Wire published on March 8, 2019, said that two of those injured in the attack later died.

UPDATE: The blog post has been updated to include additional data from the Indian government on what they have described as "incidents of terrorism" in urban areas.