No, these are not photos of a man with a mechanical heart

Multiple Facebook posts which have been shared tens of thousands of times contain a photo collage which purports to show a heart transplant patient. The claims are false; the photos in fact show US actor Robert Downey Jr. wearing prosthetic makeup behind the scenes of the 2008 superhero film Iron Man.

It includes four photos of a bearded man with what appears to be a circular mechanical device attached to his chest.

The Urdu language caption translates to English as: "Your one share can save a precious life. This person's heart has failed, and he is alive because of a mechanical heart. Doctors say this is a temporary machine, and will soon stop working.

“To keep him alive, he will need a heart transplant, and that operation will require five million rupees. Facebook has decided to help him, and contribute one rupee for every share.

"You are all requested to share this photo in as many groups and with as many friends as possible. Your one share can save a precious life." The same photo has been shared here and here on Facebook with the same claim.

But the claim is false; the photos show US actor Robert Downey Jr. preparing for his role in the 2008 superhero film Iron Man. 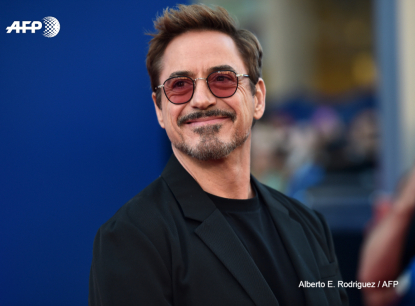 A reverse image search on Yandex reveals the images were shared on the Instagram page of Los Angeles-based makeup artist Jamie Kelman in early 2018. Kelman’s professional website here states he worked on the Iron Man film.

He shared photos of Downey Jr. in two Instagram posts here and here from the film set.

In his first Instagram post on February 22, 2018, he included the image which also appears in the bottom-right-hand corner of the photo collage in the misleading Facebook posts.

Here is the IMDB page for the 2008 film Iron Man, which lists Robert Downey Jr. in the lead role of “Tony Stark / Iron Man” and Jamie Kelman as “key makeup artist”.

IRON MAN (2008) - It is the 10th Anniversary for IRON MAN and for MARVEL ENTERTAINMENT’s current universe of movies(MCU), so I am sharing some of my photos from my time as Key Makeup Artist on the original IRON MAN movie. It seems like I really should share, because this original film seems to have taken on a somewhat classic-movie nostalgia and I get it— it’s a really cool, great movie. Also people seem to love RDJ more than ever; I get that too- he’s very talented, and quite un-ugly. I had a blast working on it, one of my favorite career experiences ever. This prosthetic makeup was built by Stan Winston Studio, supervised by Shane Mahan, and applied by 3 of us— my boss, makeup department head Deborah La Mia Denaver, and by Richie Alonzo, and by me. I made a subsequent new sculpture and appliance for when it is more healed up and less ragged (previously posted). But this piece was made by the legendary artists of the late great Stan Winston’s Studio. Fun Fact: These pix are from the VERY first day of filming the first IRON MAN, they are dated March 12, 2007. The very first shot of principal photography was Tony Stark waking up in the cave, with the RT device wired to his chest to keep him alive, courtesy of character Yinsen (actor Shaun Toub) #marvel #ironman #makeup #makeupartist #fxmakeup #makeupfx #prosthetics #charactermakeup #promua #prostheticmakeup #specialmakeupeffects #setlife #specialmakeupfx #sfxmakeup #comicbookmovies #sws #stanwinstonstudio #moviemakeup #rdj #tonystark #shanemahan #richiealonzo #robertdowneyjr #excelsior

Its caption states in part:  “This prosthetic makeup was built by Stan Winston Studio, supervised by Shane Mahan, and applied by 3 of us— my boss, makeup department head Deborah La Mia Denaver, and by Richie Alonzo, and by me.”

It adds: “These pix are from the VERY first day of filming the first IRON MAN, they are dated March 12, 2007.”

Jamie Kelman told AFP by email that the images in the misleading Facebook post showed fake make up from Iron Man.

"Yes it is absolutely fake makeup - I was the Key Makeup Artist on the original IRON MAN, and I personally took those photos of the makeup work that I had applied on actor Robert Downey Jr. as a wounded Tony Stark."

"Those pictures are from a dozen years ago in the makeup trailer and on-set during filming the first IRON MAN movie in 2007, here in Los Angeles, California."

"Yes the images are just makeup for telling the story of IRON MAN. Synthetic silicone rubber for skin, prosthetic glue and paint, with a bit of fake blood, etc," he said in a March 25 email.

Robert Downey Jr can be seen playing the role of Tony Stark in the film’s official trailer, embedded below:

The posts contain no evidence to prove that Facebook is raising money for the purported heart transplant patient. Facebook had not responded to a request for comment by time of publication.