A photo collage has been shared thousands of times in multiple posts on Facebook which claim it shows four black men who killed a white man in the US state of Atlanta in June 2020. The claim is misleading; the photo collage originates from a 2013 news report about a murder case in June 2013 in the US state of Georgia; three of the men pictured in the posts were convicted for murder and one was acquitted on all charges.

The photo collage was published here by a New Zealand based Facebook page on June 28, 2020. The post has been shared more than 2,500 times. 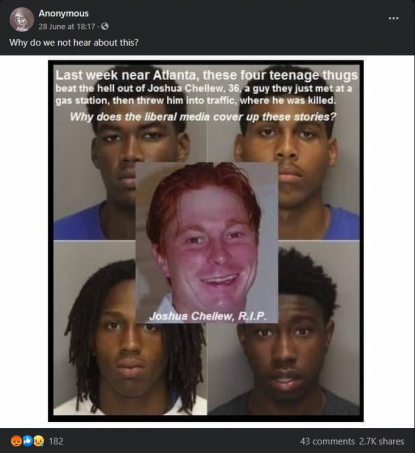 The image shows four black men and one white man in the middle alongside the text “Joshua Chellew, R.I.P”.

The text superimposed over the top of the image reads in part: “Last week near Atlanta, these four teenage thugs beat the hell out of Joshua Chellew, 36, a guy they just met at a gas station, then threw him into traffic, where he was killed.”

A reverse image search on Google combined with a keyword search found the four mugshots of the purported assailants were published in this report by the Atlanta branch of US news site Patch.com on July 3, 2013. 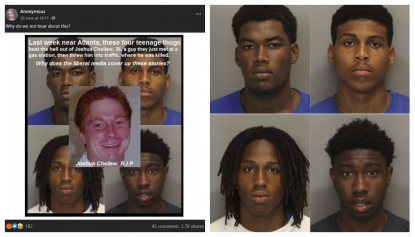 A screenshot comparison of the image in the misleading post (L) and the image published by Patch.com (R)

The image of Chellew and his alleged assailants also corresponds with the images in this August 2013 news report by NBC-affiliated news site Mableton 11Alive.

The case was heard in the Cobb Superior Court and on September 3, 2014, the jury found Anthony, Pass, and Strozier guilty of murder and several other offences. Bonds was acquitted of all charges.

Here are the verdict documents for Anthony, Pass, Strozier and Bonds.

Anthony, Pass and Strozier were all sentenced to life in jail for their role in the attack. You can read their sentencing documents here, here and here.

Chellew was killed in an incident that took place in Cobb County, Georgia, on June 30, 2013, according to this bill of indictment from the state of Georgia.

A screenshot taken on July 9, 2020, of the bill of indictment with Chellew’s time of death highlighted in yellow

On appeal, the Georgia Supreme Court ruling upheld the murder sentences for Anthony, Pass and Strozier, but reversed some of their convictions for "criminal gang activity".

This 2018 document from the Supreme Court of Georgia provides further details about their appeal. 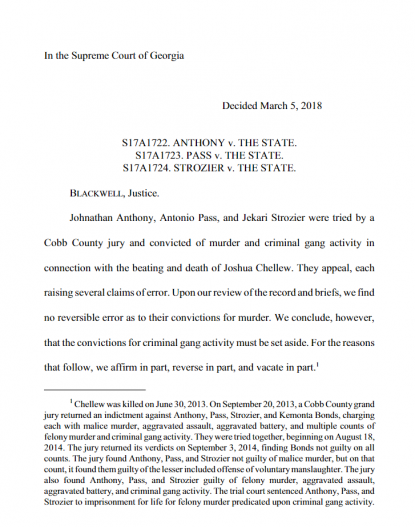