Anthony Fauci is not married to Ghislaine Maxwell’s sister

“Did you know Fauci is married to Ghislaine Maxwell’s sister?” asked a Facebook user in a July 6, 2020 post. It featured a photo of Fauci, who has gained prominence during the coronavirus pandemic, and his wife. 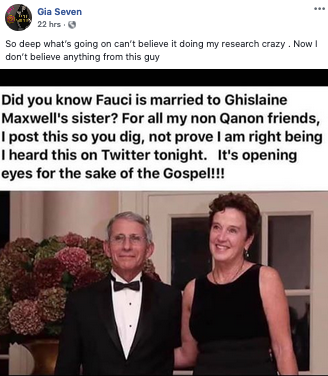 Several other online users made similar claims on Facebook, Twitter, and Instagram. It also appeared in a fake fact-checking article, but none of them provided evidence beyond a suggestion of physical resemblance between the two women.

The claims aim to associate Fauci -- the director of the National Institute of Allergy and Infectious Diseases and a member of the coronavirus task force -- with sex trafficking allegedly perpetrated by Epstein and Ghislaine Maxwell.

Fauci, who has advised American presidents for decades and led US government efforts to counter diseases including HIV/AIDS, is sometimes perceived as disagreeing with Donald Trump and has been strongly criticized by some of the president’s supporters.

But Christine Grady and Christine Maxwell are two distinct people.

“This is complete nonsense,” Grady said of the claim in an email to AFP.

Grady, 68, is chief of the Department of Bioethics at the US National Institutes for Health. She is the author of more than 175 peer-reviewed papers, with a focus on the ethics of clinical research, and is from New Jersey.

Christine Maxwell, 69, is Ghislaine’s sister, and is unrelated to Grady. She is the co-founder of Chiliad, a software company providing tools for medical researchers, as well as Magellan, a search engine. Maxwell was born in France.

Due to their contrasting origins, Grady and Maxwell speak in different accents, American and British respectively, as these two videos show.

The hoax emerged after Ghislaine Maxwell was arrested on July 2, 2020 for allegedly sex trafficking minors for her ex-boyfriend Jeffrey Epstein.

Her detention came a year after the financier’s arrest for alleged child sex trafficking. He was later found dead in his prison cell before trial.

Brian Friedberg, a researcher at Harvard’s Shorenstein Center on Media, Politics, and Public Policy who has been working on the groups that spread the hoax, told AFP by phone that the earliest iteration of the claim about Fauci’s wife appears to have originated on 8kun, the latest version of 8chan, an online message board shut down due to the extreme nature of the debates it allowed.

Fauci has been targeted during the COVID-19 pandemic by QAnon conspiracy theorists, who believe in the existence of a “deep state” controlled by affluent individuals like Epstein, but also by the Clintons or Hungarian-born billionaire George Soros. QAnon followers believe that this "deep state" is plotting against Donald Trump because he could reveal the supposed secrets of a decadent global elite that Epstein’s alleged sex trafficking perfectly embodies.

Although online interest from conspiracy theorists in Epstein’s alleged sex crimes existed before QAnon, the movement’s followers incorporated news related to Epstein, such as Maxwell’s arrest, into their wider paradigm to support the idea of the existence of a deep state, Friedberg said.

“What QAnon has done is they folded in several forms of anti-pedophile conspiracy investigations that previously existed online to sort of streamline them for a more mainstream conservative audience,” Friedberg said, adding that any theory can be worked into its canon.