Photos have been shared in multiple social media posts across Africa purporting to show a Ugandan policeman caught with a box of ballots rigged in favour of President Yoweri Museveni during the national poll held on January 14, 2021. This is false: AFP Fact Check found these are old images from Uganda’s 2016 elections. One shows a policeman supplying voting material while the other captured security forces in the capital Kampala.

“A policeman caught with a ballot box full of ticked ballot papers in favour of Mu7. Rigging denies us our choice. They have started their games,” reads a Facebook post published in Nigeria. 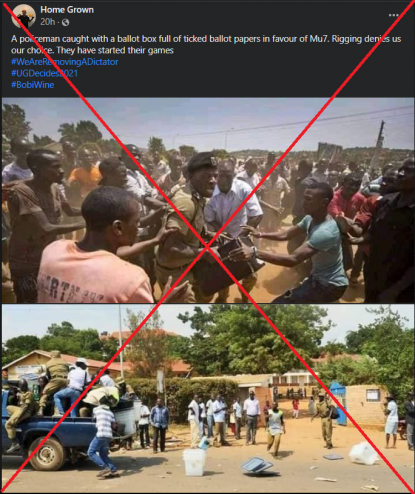 Mu7 refers to incumbent President Museveni who has been in power for three and a half decades. In January 2018, he amended the constitution for a second time to allow him to run for a sixth term in 2021 against pop star turned opposition leader Robert Kyagulanyi Ssentamu, popularly known as Bobi Wine.

Numerous other posts with the same claim have popped up elsewhere in Africa including in Uganda, Ghana, Sierra Leone, Zambia and Kenya, according to social media analysis tool CrowdTangle.

While reports of Ugandan police violating human rights have been rampant in the lead-up to the presidential election, these photos do not show recent scenes of electoral fraud. Instead, they were taken during the 2016 elections in the East African nation. 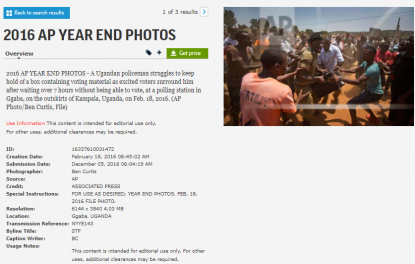 Screenshot taken on January 15, 2021, showing the photo on AP’s website

“A Ugandan policeman struggles to keep hold of a box containing voting material as excited voters surround him after waiting over 7 hours without being able to vote, at a polling station in Ggaba, on the outskirts of Kampala, Uganda, on Feb. 18, 2016,” the AP photo caption reads.

A similar reverse image search found the second image of uniformed men in a van in this 2016 report by the Voice of America about vote-rigging. 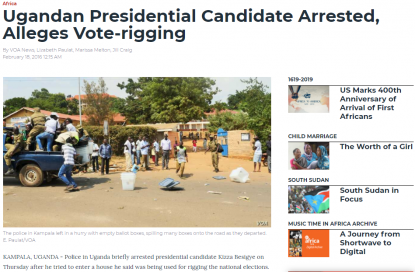 Screenshot taken on January 15, 2021, showing the photo on VOA’s website

According to VOA, the photo was taken in Uganda’s capital Kampala as police hastily departed with empty ballot boxes after arresting the then-presidential challenger Kizza Besigye.  AFP also covered the story at the time.

“Just to clarify. The photos below are of the previous 2016 election,” the FDC  said in a tweet. “Let’s endeavour to be factual and truthful, as many are relying on us for news of the 2021 election.”

Just to clarify. The photos below are of the previous 2016 election. Let’s endeavour to be factual and truthful, as many are relying on us for news of the 2021 election. https://t.co/q1YWBFx2T8

As AFP reported, Ugandans voted in the presidential poll under heavy security and an internet blackout.

The run-up to polling day was marred by a sustained crackdown on Museveni's rivals and government critics, and unprecedented attacks on the nation's media and human rights defenders.

In November, at least 54 people were shot dead by security forces loyal to Museveni during protests against one of Wine's numerous arrests.

On January 12, 2021, the president announced the suspension of social media networks and messaging services like Instagram, Twitter and WhatsApp in response to Facebook closing accounts linked to government officials the tech giant said were spreading misinformation.

AFP Fact Check has debunked several other misleading claims about the poll, including these old images of Ugandan soldiers from 2014 passed off as military patrol ahead of Wine’s campaign launch.