As Donald Trump unsuccessfully fights the results of the presidential election in courts, his campaign released the names of four dead Georgians who allegedly voted, suggesting fraud. This is false in three of the cases because the people named did not vote this year. The fourth one did cast a ballot, and the case was turned over to police and state authorities. 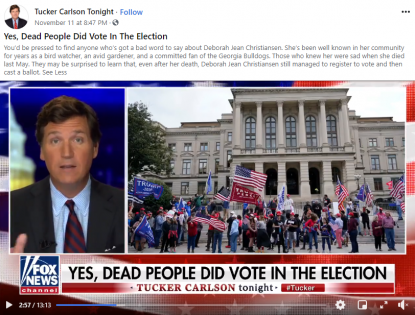 “Even after her death, Deborah Jean Christiansen still managed to register to vote and then cast a ballot,” Carlson said of the deceased Georgian.

“Linda Kesler died in 2003. 17 years later she was still voting in presidential elections,” he added.

However, of the four Georgians mentioned in the Trump campaign’s press release, only one had his identity usurped to vote in the past election, a case that was turned over to investigators.

James E Blalock, Jr of Covington, in Georgia’s Newton County, died in January 2006. Yet someone used his identity to vote in the general elections, according to the Trump press release.

The list of citizens who voted in Georgia is available online, and viewable by county. Newton County shows that a James E Blalock, Jr of Covington, GA indeed voted.

Screenshot of the Newton County voter list in Google Sheets

But Newton County officials told AFP that in fact Mr Blalock’s widow has been voting under his name as Mrs James E Blalock, Jr for the past few elections.

“It was his wife who voted and we verified the information,” Melinda Alexander, a Newton County Board of Elections employee, told AFP by phone. “She was Mrs James Blalock, and that’s how she was registered. The news picked it up and said he voted, but he did not vote; it was her, because she took his name.”

Newton County issued a statement debunking the false reports, confirming that James Blalock’s widow -- not her dead husband -- voted in his name. “A check in her profile shows she is a female,” it says. “Her signature on the records reflects that her voter registration was signed as Mrs James E Blalock, Jr and that is exactly how she signed her name when she voted in the Nov 3 General Election.”

Local press reported on the confusion, leading Tucker Carlson to issue an apology on November 13.

Another allegedly usurped identity is that of Linda Faye Seagraves Kesler of Nicholson in Georgia’s Jackson County, who died in 2003.

Contacted by AFP, Jennifer Logan, elections director for Jackson County Elections and Registration Office, said it was “not true” that Kesler voted in the November 3 election.

“We  have a Lynda Kesler that did vote, but she’s alive and well and she lives in Jefferson,” she added. “They have different birthdays, different social (security numbers) and the spelling of the name is different. It’s L-Y-N-D-A.”

Publicly available voter rolls from Jackson County do show that a Lynda Kesler of Jefferson voted, but no Linda Faye Seagraves Kesler.

Screenshot of the Jackson County voter list in Google Sheets

Deborah Jean Christiansen, a vote out of thin air

Deborah Jean Christiansen of Roswell in Georgia’s Fulton County died in May 2019, and did not vote in 2020.

“Our records reflect her voter history prior to her death, with her last vote cast in 2018. Her voter registration was canceled in 2019 through the normal process of database checks with vital records. We do not have a new voter registration on file for Ms Christiansen,” Jessica Corbitt, director of external affairs for Fulton County, which includes Atlanta, told AFP by email.

“If someone came to vote on election day posing as this person, then they would have committed a crime and we would take action”.

Lastly, a vote was indeed cast in the November 3 election for Edward Skwiot of Trenton in Georgia’s Dade County, despite the fact he died in 2015.

Skwiot’s name appears on the roll of votes in the county, where Donald Trump took more than 6,000 of the 7,327 votes cast.

Screenshot of the Dade County voter list in Google Sheets

“This is true,” Dade County elections supervisor Tammie Vaughan told AFP by phone. “All the information was given to the local police department and the Georgia secretary of state.”

Neither agency responded to AFP’s requests for comments by the time of publication.

According to local outlet WRCBTV, an absentee ballot in Skwiot’s name was issued on October 1, and received on October 19. The station said the Dade County Sheriff’s Office is investigating.

On November 5, a Georgia judge dismissed a lawsuit Trump’s lawyers filed over the handling of absentee ballots in Chatham County.

President Trump claims he won and insists the vote was rigged despite the findings of electoral officials and the near-universal defeat of his court challenges that claimed irregularities.