A photo of a building covered in scaffolding has been shared thousands of times in multiple Facebook, Twitter and Instagram posts that claim the image is the first photo of a new Ram temple being constructed at a flashpoint religious site in the north Indian city of Ayodhya. The claim is false: the photo actually shows a different temple which is being constructed in the north Indian city of Varanasi. According to the Ram temple board in Ayodhya, construction of the planned new building has yet to begin as of November 2020.

The photo was published here on Facebook on October 31, 2020. 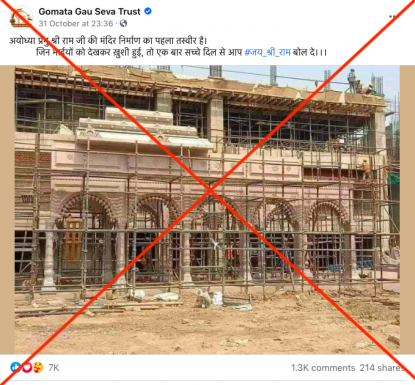 The post’s Hindi-language caption translates to English as: “Ayodhya: First photo of Lord Ram temple. Those who feel elated at this picture, they should chant the cry of victory to Lord Ram with a pious heart.”

In August 2020, Prime Minister Narendra Modi announced the construction of a new temple to the Hindu deity Ram at a flashpoint religious site in the holy city of Ayodhya that has sparked some of the country's bloodiest sectarian violence, AFP reported.

A reverse and keyword search on Google found the photo had been published here on the official Twitter account of Indian state radio broadcaster on October 27, 2020.

The tweet reads as: “Under construction Kashi Vishwanath Temple in Varanasi.”

Kashi Vishwanath temple is located in the north Indian city of Varanasi. Prime Minister Modi laid the foundation stone for the building in March 2019. The ceremony was streamed live here on the prime minister’s official YouTube Channel.

A similar photo of construction work being carried out at Kashi Vishwanath temple was published in media reports in October 2020 here on the India TV website and here on the Hindustan Times news website.

The construction of Ram Temple in Ayodhya is yet to begin as the temple board in Ayodhya has invited a call for design ideas in a tweet posted here on their official Twitter account on November 4, 2020.

The official Twitter account of the Ram temple board also posted the photos here on October 9, 2020, on Twitter of stones being shifted to the temple site which will be used in the construction of the temple.

The work of shifting the carved stones from the workshop to the Mandir premises has started. The stones will be used in construction of Shri Ramjanmabhoomi Mandir. pic.twitter.com/Vn3P4IvLHk