Skip to main content
A person gets a temperature check before entering a store on June 22, 2020 in the Brooklyn Borough of New York City (AFP / Angela Weiss)

Online articles claim a study from Stanford University found that mask wearing, which is recommended to help slow spread of Covid-19, is “ineffective” and harmful. But the paper was retracted, the study’s author is not employed by the prestigious California university, and it repeated previously debunked claims about the use of face coverings during the pandemic.

“Stanford Study Results: Facemasks are Ineffective to Block Transmission of COVID-19 and Actually Can Cause Health Deterioration and Premature Death,” warned the headline of an April 19, 2021 article from The Gateway Pundit, an online publication that has made other inaccurate claims that AFP Fact Check has debunked. 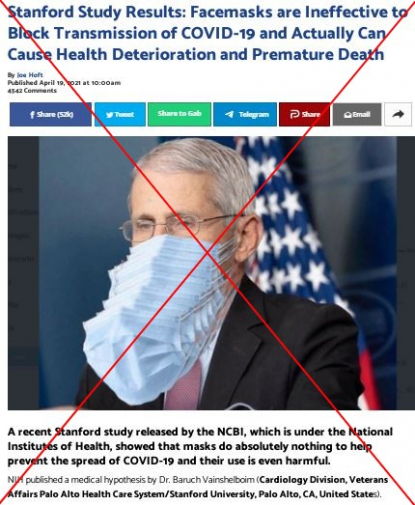 Screenshot of a Gateway Pundit article, taken on April 20, 2021

The article -- which has since been updated to indicate that the study’s author is not currently connected to Stanford -- has been shared more than 29,500 times, including by Josh Mandel, an Ohio Republican candidate for Senate, according to social media monitoring tool CrowdTangle.

Screenshots of the article have also been liked thousands of times in Instagram posts in the United States and Canada.

The US requires people to wear face coverings when traveling on planes, trains and buses. Various state and local governments have instituted mask mandates, though some have begun to lift them. Many Canadian provinces and territories also mandate masks on public transit or in indoor spaces.

Face covering requirements sparked an intense backlash among those who view them as an inconvenience or an impingement on personal freedom. Inaccurate information about masks and their utility continues to spread online. 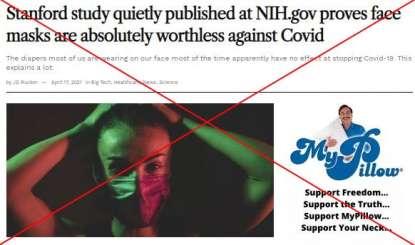 Screenshot of an article from NOQ Report taken on April 20, 2021

Both articles point to this study, “Facemasks in the Covid-19 era: A health hypothesis,” published in the January 2021 edition of the journal Medical Hypotheses.

Colin Furness, assistant professor at the Dalla Lana School of Public Health, University of Toronto, said in an email that the Medical Hypotheses paper was “garbage” and should not have been published.

Medical Hypotheses has now retracted the article and apologized to readers.

The journal says it aims to serve “as a forum for innovative and often disruptive ideas in medicine and related biomedical sciences. However, our strict editorial policy is that we do not publish misleading or inaccurate citations to advance any hypotheses.”

After a review, the journal’s editorial committee concluded that the paper was misleading because the manuscript selectively cited published papers, and a table in the article included “unverified” data.

Links to the study, which can be found in the National Institutes of Health’s (NIH) National Library of Medicine (NLM) database, were also shared on Twitter after Steve Cortes, a former member of the Trump campaign, posted it on April 16, 2021.

Screenshot taken on April 20, 2021 of a tweet that is no longer available from Steve Cortes

But the NLM explained in an email that “the presence of any specific article or citation in NLM’s physical or electronic collections, including PubMed, does not constitute agreement with, or endorsement of, or promotion of its contents by the NLM or NIH.”

Despite claims of an affiliation with Stanford, the article’s author, Baruch Vainshelboim, is not employed by the university.

“The author’s affiliation is inaccurately attributed to Stanford, and we have requested a correction,” Julie Greicius, senior director of communication for Stanford Medicine, said by email.

“Stanford University has never employed Baruch Vainshelboim. Several years ago (2015), he was a visiting scholar at Stanford for a year, on matters unrelated to this paper,” she said.

A LinkedIn profile describes Vainshelboim as a Clinical Exercise Physiologist with a PhD in pulmonary rehabilitation from the Universidade do Porto in Portugal.

Vainshelboim did not respond to an AFP request for comment by the time of publication.

Below, AFP Fact Check breaks down false claims Vainshelboim made about wearing masks.

Claim: “Data suggest that both medical and non-medical facemasks are ineffective to block human-to-human transmission of viral and infectious disease such SARS-CoV-2 and COVID-19.”

This claim does not match the findings of a June 2020 meta-analysis published in the Lancet that examined 172 studies from 16 countries across six continents. It concluded: “Wearing face masks protects people (both health-care workers and the general public) against infection.”

Similarly, an October 2020 working paper from Canada, found that a mask mandate in Ontario, the most populous province, was “associated with a reduction of 25 percent in the weekly number of new Covid-19 cases.”

Vainshelboim’s article accurately points out that guidance issued by health authorities about the use of non-medical masks has changed over the course of the pandemic, but the World Health Organization (WHO) currently recommends that masks be worn “as part of a comprehensive strategy of measures to suppress transmission and save lives.”

The US Centers for Disease Control and Prevention (CDC) -- which did not recommend widespread mask use early in the pandemic -- has since made clear that face coverings are an important part of the fight against Covid-19.

“Masks are a simple barrier to help prevent your respiratory droplets from reaching others.”

An evidence review published in the Proceedings of the National Academy of Sciences in January 2021 recommended that “public officials and governments strongly encourage the use of widespread face masks in public.”

Claim: “Wearing facemasks has been demonstrated to have substantial adverse physiological and psychological effects. These include hypoxia, hypercapnia.”

During the pandemic, AFP Fact Check has debunked numerous claims about the supposed risk of hypoxia -- a lack of oxygen in the body -- and hypercapnia -- a condition caused by a buildup of carbon dioxide in the blood -- to mask wearers.

The WHO has also debunked these claims, advising people to ensure that a mask fits properly and allows for normal breathing.

Philipp Lepper, a member of the German Society for Pneumology and Respiratory Medicine and senior physician at the Saarland University Hospital, explained in this AFP article that because the air behind the mask is mixed with fresh air each time you breathe in, “this has no effect on the oxygen and carbon dioxide levels measured in the body.”

This claim also circulated in French and was debunked by AFP Factuel.