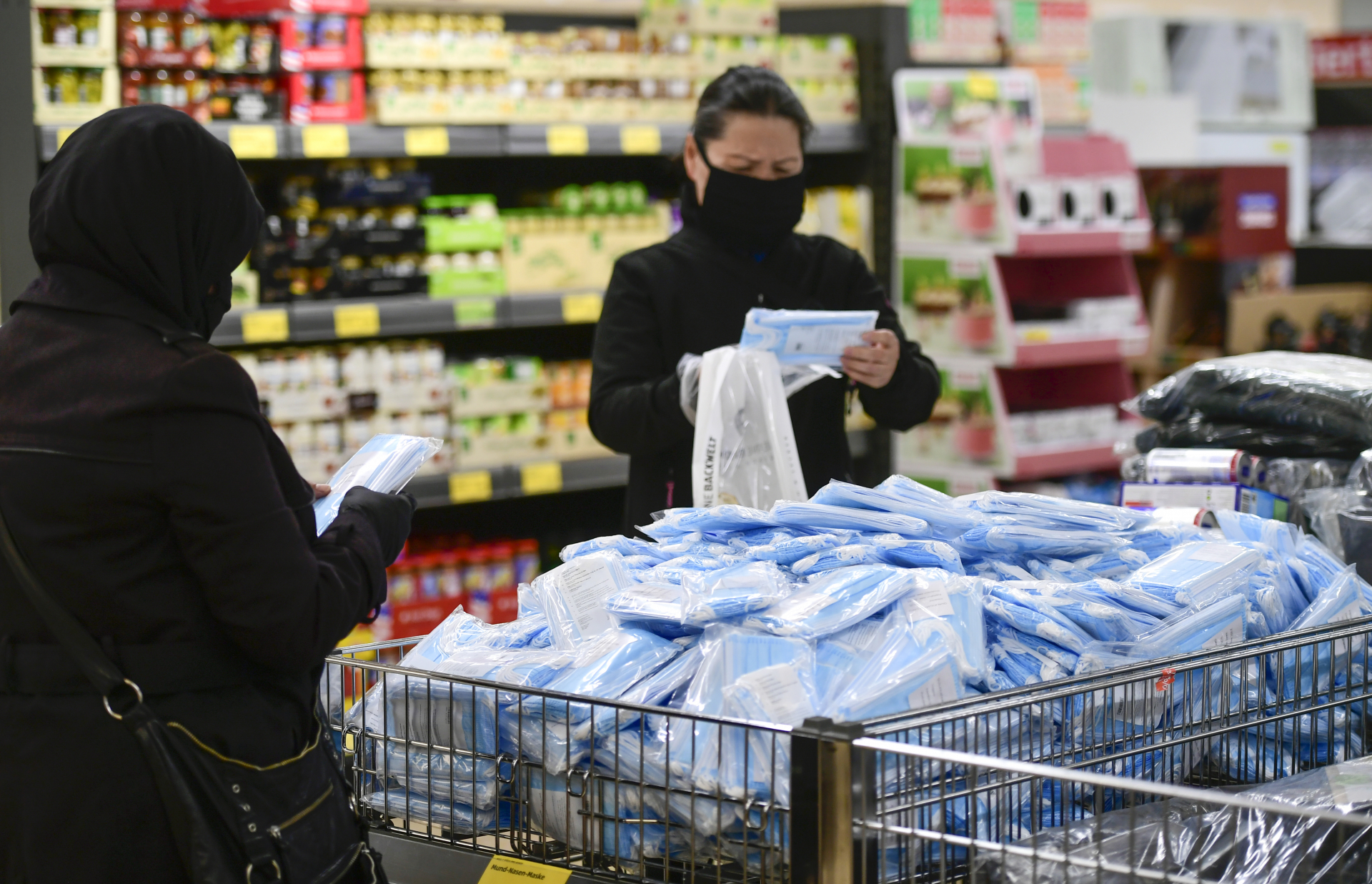 There are nerve cells that would not survive for long without oxygen however, this cannot be triggered by wearing a mask, since it does not cut off oxygen (AFP / Ina Fassbender)

Experts say wearing face masks does not cause neurological damage

Posts based on a video by a German neurologist have been shared thousands of times on Facebook making several claims about the alleged dangers of wearing face masks, notably that rebreathing oxygen in the mask leads to neurological damage. According to experts, this is false, since these masks allow fresh air to pass through and oxygen to be inhaled.

AFP Fact Check’s reporters in Germany first debunked the 20-minute German-language video by neurologist Margareta Griesz-Brisson after it was shared more than 30,000 times on Facebook.

The multiple claims in the video have been translated into English and shared in Facebook posts including here and here, along with a summary of the claims in image form.

A screenshot of the misleading claim taken on October 19, 2020

In the video, Griesz-Brisson criticises the German government’s Covid-19 pandemic response and warns her viewers against wearing face masks.

She claims that masks let the virus through and wearing them creates a lack of oxygen as well as a flood of carbon dioxide in the body. She goes on to claim that nerve cells in the brain will die off after a short time.

In the video, Griesz-Brisson introduces herself as a neurologist with a practice in London and a second practice in Müllheim, in southern Germany.

On the homepage of the London practice, it says Griesz-Brisson completed a doctorate at the University of Freiburg. A dissertation by Margareta Griesz from 1989 can be found in the university database.

Griesz-Brisson specialises in natural treatment methods according to this DVD, which is a recording from a congress in 2006. There, she talked about detoxification of heavy metals from the body. She is also cited in connection with a “detox ion foot bath” therapy.

In a video on Vimeo from 2017, she talked about her natural medicine approach, saying that as much as possible, she rejects everything she considers unnatural in her treatments – for example, plasters.

After publishing her Facebook video, Griesz-Brisson made a number of public appearances. In an October 5, 2020 video on Bitchute, she promises to issue mask-exemption certificates for everyone, even those she had not seen as a patient. She was recently also a guest on the stage of a lateral-thinking event in Konstanz, southern Germany, on October 4, 2020.

No publications by Griesz-Brisson can be found in the Google Scholar or PubMed databases. She justifies this in the video on Bitchute by saying that she doesn’t like to write or talk.

Masks lead to lack of oxygen?

AFP Fact Check reviewed Griesz-Brisson’s claims, which were summarised in the posts in English.

The first claim holds that face masks are harmful to an individual’s health: “The rebreathing of our exhaled air will without a doubt create oxygen deficiency and a flooding of carbon dioxide,” the posts read.

AFP Fact Check asked Philipp Lepper, a member of the German Society for Pneumology and Respiratory Medicine (DGP) and senior physician at the Saarland University Hospital, about the veracity of the claim.

“Since the amount of air behind the mask is very small and is mixed with fresh air each time you breathe in, this has no effect on the oxygen and carbon dioxide levels measured in the body,” he added.

Lepper explained that this is possible because air flows freely through the mask.

“An oxygen molecule has a size of around 260 picometers. The pore size of medical mouth and nose masks is around 100,000 to 1,000,000 times larger than an oxygen molecule,” he said. A face mask would not hold back any of the components of the air – not oxygen and not even CO₂.

AFP Fact Check has previously disproved claims about the concentration of CO₂ collecting beneath face masks here and here.

But why do we sometimes heave or breathe more heavily while wearing a mask if there isn’t a lack of oxygen?AFP Fact Check contacted Dominic Dellweg, chief physician of pulmonology and intensive care medicine at Germany’s Fachkrankenhaus Kloster Grafschaft hospital.

He replied in an email on October 6, 2020: “The mask provides additional resistance for our breathing. Our respiratory muscles have to work harder to breathe the air through the mask. It can be uncomfortable and even cause shortness of breath.”

However, he added that “this is not an expression of an insufficient supply of oxygen to the body.” There is still enough oxygen being inhaled; he said this feeling of resistance can lead to a false alarm in the body but is not harmful.

“This increased exertion is reported to the brain as shortness of breath via receptors in the respiratory muscles, although the values for oxygen and carbon dioxide are in the normal range,” said Dellweg.

The World Health Organization reiterates this on its website: “The prolonged use of medical masks can be uncomfortable. However, it does not lead to CO₂ intoxication nor oxygen deficiency.”

Asked if masks could be dangerous for people with prior health conditions such as Chronic Obstructive Pulmonary Disease (COPD), Philipp Latzin, head of the pediatric pulmonology department at the University Children's Hospital Inselspital Bern, said no.

As for whether masks lead to a change in oxygen saturation or CO₂ in the blood, Latzin responded by quoting a new study from the University of Miami: “This was not the case either in healthy individuals or in patients with severe COPD.”

The study had its limitations: It only included 30 people who took six-minute walks and spent 30 minutes at rest; 15 of them were healthy persons around 30 years old and the other 15 were around 70 years old with severe COPD.

The study found that gas exchange is not significantly affected by the use of surgical masks, even in subjects with severe lung impairment.

A German study, published by Deutsches Ärzteblatt on October 2, 2020, came to a similar conclusion using healthy volunteers. It says: “In summary, a short-term high workload under common mask types used in hospitals seems to have a measurable, but clinically irrelevant influence on blood gases and vital parameters in people of working age without a known underlying cardiopulmonary disease.”

Yves Coppieters, epidemiologist and professor of public health at the Free University of Brussels, also explained to AFP Fact Check in July that a mask poses no problem of lack of oxygen for people in good health: “The mask is not a closed circuit, it allows oxygen to pass.”

He added, however, “it can possibly interfere with the breathing of a person with heart or respiratory problems or when exerting great effort”.

AFP Fact Check has previously disproved multiple claims about masks causing a lack of oxygen in the body here (in English) and here (in French).

Griesz-Brisson claims numerous health consequences are caused by using face masks: “We know that the human brain is very sensitive to oxygen deprivation. There are nerve cells, for example in the hippocampus, that can’t go longer than three minutes without oxygen –they cannot survive.”

He said that it’s true that there are nerve cells that would not survive for more than three minutes without oxygen. However, as already shown above, this cannot be triggered by wearing a mask, since it does not cut off oxygen.

In her video, Griesz-Brisson warns that the acute warning symptoms of a lack of oxygen are “headaches, drowsiness, dizziness, issues in concentration, slowing down of the reaction time – reactions of the cognitive system.”

“However, when you have chronic oxygen deprivation, all of those symptoms disappear, because you get used to it. But your efficiency will remain impaired and the undersupply of oxygen in your brain continues to progress,” she says.

She says she herself does not wear a mask: “I need my brain to think. I want to have a clear head when I deal with my patients, and not be in a carbon dioxide-induced anaesthesia.”

Berlit said these symptoms are “not possible when wearing everyday masks made of fabric and surgical masks”.

He explained: “The symptoms mentioned can occur with long-term rebreathing of CO₂ for example from an airtight plastic bag.”

The post says that it “must be the free decision of every human being whether they want to wear a mask that is absolutely ineffective to protect themselves from a virus”.

As explained above, the virus is transmitted through larger aerosols in the air which are carrying the virus on particles. “Commercially-available mouth and nose masks can filter off these particles – to a certain extent,” said Lepper.

In May 2020, Lepper published a study that showed that people wearing face masks primarily protect others from potentially contaminated exhaled air. The filter performance would vary depending on the material used.

AFP Fact Check contacted Griesz-Brisson by email on October 14, 2020. She responded with an email that did not answer AFP’s questions but asked for respect for her work and experience. In it, she criticised the federal government’s requirement to wear masks.