Dozens of posts shared hundreds of times on Facebook and WhatsApp claim that South African President Cyril Ramaphosa told foreigners to leave the country to minimise the spread of the novel coronavirus. The claim is false; he has made no such announcement and the Department of Home Affairs refuted the claim.

One of these Facebook posts, published April 7, 2020, has been shared more than 480 times. It reads, in part: “BREAKING NEWS# The president Cryill Ramaphosa has asked all foreign nations to depart south Africa before 21 june 2020 due to increasing cases of COVID 19 (sic).” 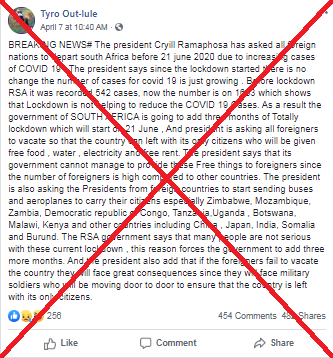 The claim has been repeated numerous times in other Facebook posts, such as here and here.

In a tweet, Minister in the Presidency Jackson Mthembu refuted the posts’ claim about foreign nationals being asked to leave, as well as the claim about the country’s lockdown being extended by three months.

We are working with the police , social media providers to unmask the person who posted these fake news . The law will take it’s course thereafter . #Stayhome #Staysafe #doyourpart #Savelives #lockdown #Stopcovid19SA .

The Department of Home Affairs also tweeted the claim with a “fake” banner across it.

Multiple misleading claims have been shared in South Africa regarding an extension of the current 21-day lockdown, as debunked here by AFP Fact Check. The lockdown is slated to end on April 30.

The South African government recently approved for the national carrier to start repatriating some international citizens who were stuck in the country during the lockdown, such as Germany.

Belgian citizens will also be repatriated on April 9, according to a tweet by South African Airways.