A video has been viewed tens of thousands of times in multiple Facebook posts alongside a claim it shows a violent military crackdown on protesting monks in Myanmar. The posts circulated online shortly after Myanmar's military seized power in a bloodless coup in early February 2021. The claim, however, is misleading: the footage in fact shows protesters clashing with the Myanmar military in Yangon in 2007.

“Thousands of people are already taking to the streets alongside the monks...

The footage features the logo of news network Al Jazeera in the bottom right-hand corner.

The footage, however, has been shared in a misleading context.

A reverse image search on Google of keyframes extracted from the video found it was originally published by Al-Jazeera on YouTube here on October 11, 2007, more than one decade before the 2021 coup.

The video is titled “Inside Myanmar: The Crackdown”. The same footage shared in the misleading posts can be seen from the video's 42-second mark.

Below is a screenshot comparison of the footage shared in the misleading posts (L) and the 2007 Al Jazeera video (R): 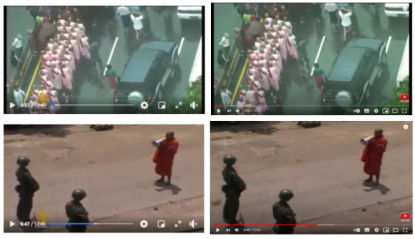 The YouTube video's caption reads: “Back in 2007, the people of Myanmar were still living under harsh military rule. Among the first major international news stories Al Jazeera covered was the Myanmar government's brutal crackdown on peacefully protesting monks.”

The unrest in Myanmar in 2007, which saw the country's military junta launch a bloody crackdown on protests, was also covered by other major international news outlets; for example AFP here and The New York Times here and here.

Human Rights Watch released a report published here in December 2007 that detailed a “brutal and bloody crackdown” against protesters in Myanmar in the fall of that year.