An image has been shared widely on Facebook, Instagram and Twitter alongside a claim it shows "the only clear photo ever taken from the surface of Venus by Soviet spacecraft Venera 13". The claim is misleading: the image was originally created by an American researcher who told AFP he enhanced a monochrome image of Venus taken by Venera 13. The image was subsequently colourised by other internet users, he said.

The picture was published on Facebook on January 24, 2021 here. It has been shared more than 200 times.

The text superimposed on the image reads: “This is the only clear photo / Ever taken from the surface of Venus”.

The post’s caption reads: “A shot of the rocky surface of Venus, taken by the Soviet Venera 13 mission.” 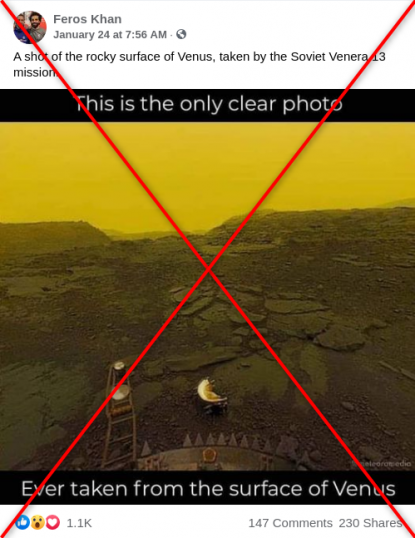 Venus is the second planet from the Sun and the closest planet to planet Earth.

Venera 13 was a Soviet Union space probe that was sent to Venus on October 30, 1981. It was the first to send back colour images of the surface of Venus. 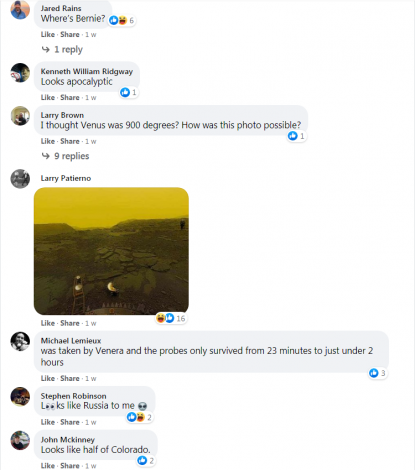 A reverse image search on Google found a monochrome version of the image published here. It is described as a "perspective image" on a website for American researcher Don P. Mitchell. He explained on his website here how he combined raw imagery data from the Soviet space probe sent to Venus using image editing software. 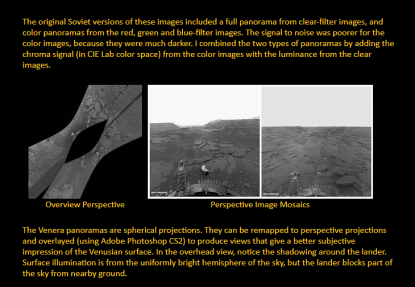 Screenshot of the perspective images on Don P. Mitchell’s website on February 5, 2021

His explanation reads in part: "The Venera landers transmitted digital images with a depth of 9 bits and an approximately logarithmic encoding of photometric brightness ...The original Soviet versions of these images included a full panorama from clear-filter images, and color panoramas from the red, green and blue-filter images. The signal to noise was poorer for the color images, because they were much darker. I combined the two types of panoramas by adding the chroma signal (in CIE Lab color space) from the color images with the luminance from the clear images.

“The Venera panoramas are spherical projections. They can be remapped to perspective projections and overlayed (using Adobe Photoshop CS2) to produce views that give a better subjective impression of the Venusian surface. In the overhead view, notice the shadowing around the lander. Surface illumination is from the uniformly bright hemisphere of the sky, but the lander blocks part of the sky from nearby ground.”

In response to a February 4 enquiry from AFP on his Facebook page about the misleading social media posts, Mitchell said: “I created the [black and white] images. The colorized images are done by other people, and in my opinion are not very accurate.”

Below is a screenshot comparison of the image in the misleading Facebook post on (L) and Mitchell’s processed perspective image (R):

Mitchell also said in this tweet posted on January 27, 2021 that he created this perspective image from Venera 13.

Referring to this thread on his Twitter account, he said: “The panoramic images come from the original digital telemetry with a lot of processing to combine noise-free segments and adjust for camera non-linearities.”

The entire video transmission from Venera-13. The darker sections are where red, green or blue filters are dropped in place. pic.twitter.com/VXHpXBAqx7

Mitchell has also spoken about his methodology in processing the images in this article published on September 11, 2006, on space.com. The website is dedicated to “space exploration, innovation and astronomy news”, according to its description.

A more succinct version of the explanation regarding his editing process can be seen on his Twitter page here. He also mentioned here that he obtained the raw images through “friends in the Russian science community.”

He also explains here that Venus and the space probes are depicted with particular colours due to the colour filters it was scanned with. But it is difficult to determine the true colour of the planet because the atmosphere filters out blue light, as explained by NASA here.

The original image of the space probes can be accessed here on NASA Science. Similar images can also be viewed on the Roscosmos State Corporation for Space Activities, a Russian state corporation for space activities, website here. 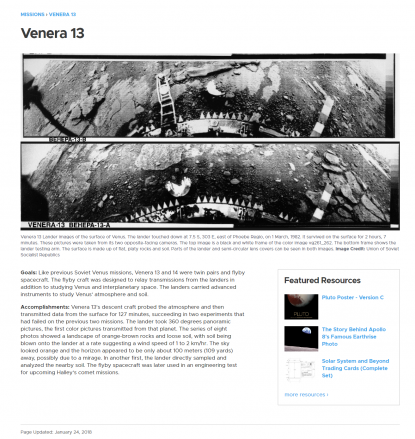