A photo has been shared hundreds of times in multiple posts on Facebook alongside claims it shows Myanmar soldiers discarded their uniforms and equipment in a protest against the military coup on February 1, 2021. The claim is false: the photo was taken in 2016 during an attempted coup in Turkey.

The photo was posted here on Facebook on February 2, 2021. It was shared more than 600 times before it was removed.

“Myanmar soldiers discard their uniforms, taking no part in the coup,” the Thai-language caption reads. 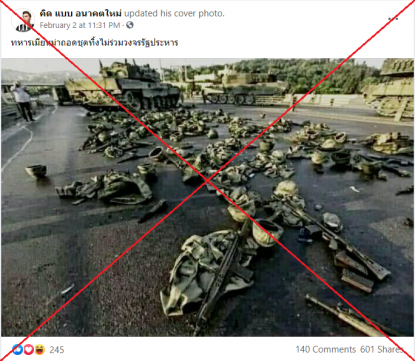 The photo was shared after Myanmar’s military seized power in a bloodless coup on February 1, 2021, detaining civilian leader Aung San Suu Kyi and imposing a one-year state of emergency.

Governments around the world have condemned the coup and called for a restoration of Myanmar’s democracy, while people in the Southeast Asian country’s biggest city Yangon have gathered nightly, banging pots and honking car horns to voice their opposition to the coup.

“For the plot to succeed, the army faction needed public support or wider military backing. Neither materialised. Opposition parties also condemned the coup,” it reads.

“In the early hours of Saturday morning, groups of soldiers involved began to surrender. Troops abandoned their tanks with their hands up.”

Tens of thousands of people were arrested following the failed coup to overthrow Turkish President Recep Tayyip Erdogan. He subsequently imposed a state of emergency that critics said he exploited in order to target government opponents, including critical journalists and pro-Kurdish critics. 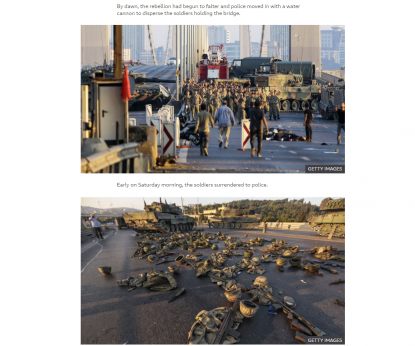 The photo is credited to photo agency Getty Images.

The original photo can be found here on Getty Images’ online photo archives.

The caption reads: “Clothes and weapons belonging to soldiers involved in the coup attempt that have now surrendered lie on the ground abandoned on Bosphorus bridge on July 16, 2016, Istanbul, Turkey.

Below is a screenshot comparison between the photo in the misleading Facebook post (L) and the Getty Images photo (R):