A photo has been shared tens of thousands of times on Facebook and Twitter alongside a claim it shows Thailand’s Prime Minister General Prayuth Chan-ocha greeting Myanmar’s Foreign Minister Wunna Maung Lwin at Don Meung airport in Bangkok. The photo circulated online as Myanmar's junta-appointed foreign minister visited Bangkok to hold talks with his counterparts from Thailand  and Indonesia in what was the first known face-to-face meetings between a senior junta member and foreign government officials. The image has been shared in a misleading context: the photo in fact shows Prayuth with his secretary-general Distat Hotrakitya at the entrance of the Royal Thai Police Headquarters.

The photo was shared here on Facebook on February 24, 2021 by Free Youth, a youth-led anti-government group. It has been shared more than 43,0000 times. 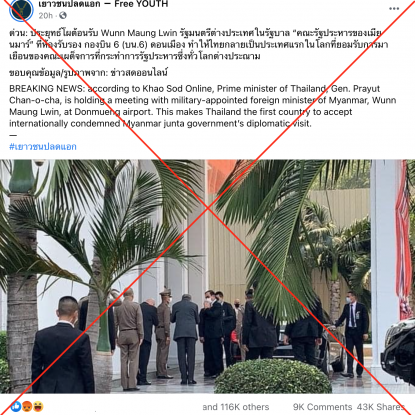 General Prayut Chan-O-Cha is Thailand’s prime minister and former army chief who seized power from the democratically-elected government in 2014.

The misleading post circulated online as Maung Lwin held talks with his counterparts from Thailand and Indonesia in the first known face-to-face meetings between a senior junta member and foreign government officials.

The photo was also shared hehttps://archive.is/gmXMtre by Pakornwut Udompipatskul, an MP from the opposition Move Forward Party in a tweet shared more than 8,000 times.

While the Thai prime minister did meet Myanmar’s foreign secretary on February 24, 2021, Myanmar local media reported here, the photo does not show the event.

Prayuth was set to chair a meeting of the police committee at the National Police Headquarters on February 24, 2021 at 2pm, local media reported.

The photo shows the headquarters of the Royal Thai Police in the background.

Various corresponding features are visible in both the photo in the misleading posts and and an image of the building on Google Maps, as shown in the image comparison below:

“The Prime Minister was at the headquarters of the Royal Thai Police to hold a meeting of the police committee,” he said by phone on February 25, 2021.

Yingyos identified the man mistaken for Myanmar’s foreign minister as Distat Hotrakitya, the secretary-general to the prime minister.

“He is the one bowing to the Prime Minister Prayuth,” he said.

The video shows Distat, wearing a grey suit and yellow tie, walking behind him at the three-minute 41-second mark.

Below is a screenshot comparison of the Police TV’s livestream and Distat’s photo on the government website: 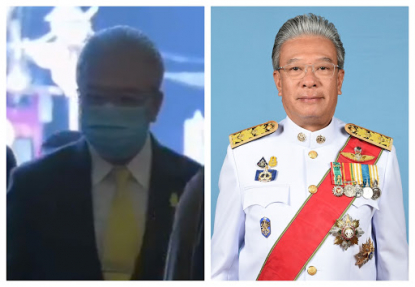