An image has been shared repeatedly in multiple Facebook posts in February 2021, purporting to show a Sri Lankan opposition politician holding a photo of a locally produced soft drink during a media interview. The posts claim the politician was criticising the drink brand. The claim is false: the image has been doctored to include the photo of the drink brand. In the original photo, the politician was holding an image of a US Air Force aircraft during a press conference in October 2020.

Rathnayake is a former parliamentarian who represented the Kurunegala district for Sri Lanka’s far-left political party, the People’s Liberation Front (JVP), from 2015 until 2020.

“Nelli cola instead of fizzy drinks

“Attempts are being made to mislead the public by branding a drink made of fermented nelli
“mixed with chemicals, as a locally manufactured drink 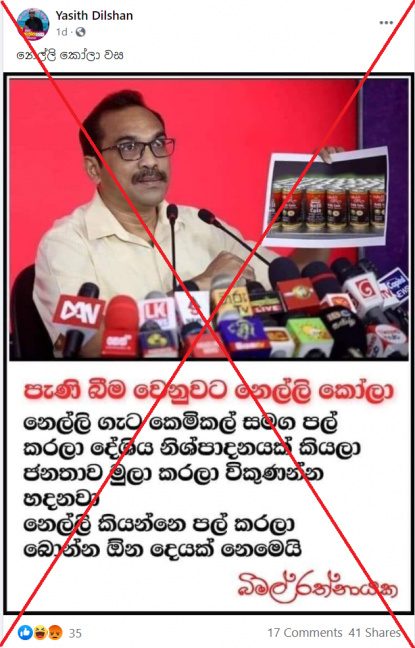 Nelli Cola is a Sri Lankan soft drink brand made from a popular fruit in grown in the island nation called Nelli.

The image was shared alongside a similar claim on Facebook here and here.

Comments from some Facebook users suggested they were misled by the image.

One Facebook user wrote: “This fellow is such a loser. There is no difference between Sajith’s party and this lot”.

The image, however, has been digitally manipulated to include the photo of the drink brand.

A reverse image search on Google found the original image used in this story published by Sri Lankan newspaper The Island on October 26, 2020. It shows Rathnayake holding an image of a US Air Force aircraft, not Nelli Cola cans.

It is headlined: “JVP asks Govt. to state its stand on Pompeo’s Sri Lanka visit”.

The report’s first paragraph reads: “The US even before sending its State Secretary Mike Pompeo to Sri Lanka has issued a veiled threat that Sri Lanka had to decide with what foreign powers it should align itself, says the JVP, demanding the Rajapaksa government to explain its stance on US bullying.” 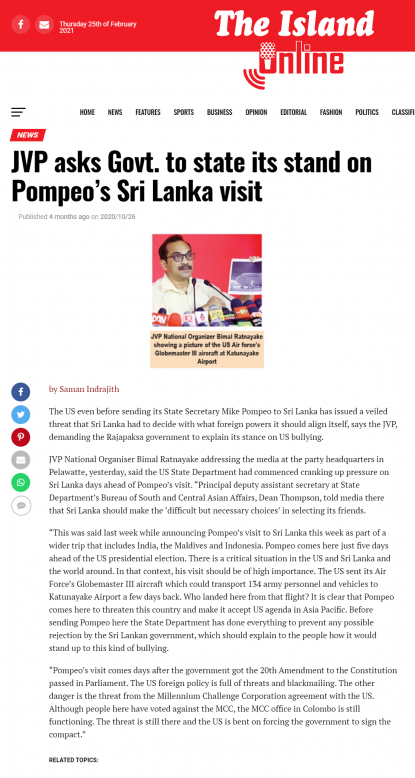 Screenshot of The Island news report from October 2020

Rathnayake held a press conference on October 25, 2020 about former US Secretary of State Mike Pompeo’s visit to Sri Lanka.

It was featured in this video by local broadcaster Newsfirst Sri Lanka. At the video’s 20-minute 57-mark, it shows Rathnayake holding up the image of the US Air Force aircraft.