Skip to main content
A customer holds bank notes and card as he queues at a mobile ATM of a state bank during a government-imposed nationwide lockdown as a preventive measure against the COVID-19 coronavirus, in Colombo on April 11, 2020. (AFP / Lakruwan Wanniarachchi)

Multiple Facebook posts shared thousands of times in February 2021 claim that ATM withdrawal fees were waived in Sri Lanka. The claim is false: Sri Lanka’s national payment infrastructure body as well as private banks said no such decision to waive ATM fees had been made.

The claim was made in a graphic image published on Facebook here on February 18, 2021.

The graphic’s Sinhala-language text translates to English as: “From today onwards, cash can be withdrawn using any bank card off ATMs without any withdrawal fee”.

The Facebook post’s caption translates as: “A must be done request / Here is the good news that was implemented”. 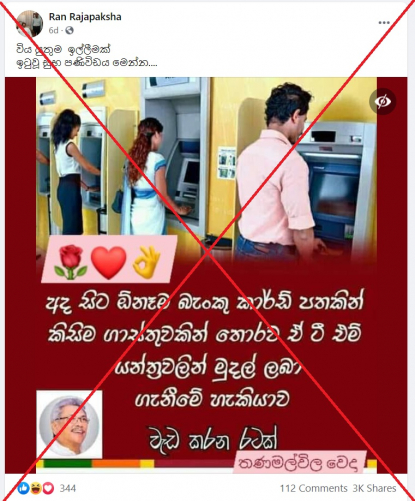 A similar claim was made on Facebook here, here and here.

The claim is false, according to private banks and Sri Lanka’s national payment infrastructure.

A spokesperson for LankaClear, a national payment infrastructure organisation that is owned by the Central Bank of Sri Lanka, told AFP by phone on February 23, 2021: “No decision has been made to revise or wave off the withdrawal fee charged for CAS".

CAS is an acronym for the Common ATM Switch, a LankaClear system that allows consumers to withdraw money from any ATM in the country regardless of their personal bank. The CAS network connects 99.95% of ATMs in Sri Lanka, LankaClear notes here.

Customer support centres from multiple banks — including People’s Bank, Nations Trust Bank and Bank of Ceylon — also told AFP no decision has been made to waive ATM fees as of February 26, 2021.