Pelosi does not fly home weekly on 200-seat jet

A years-old claim that House Speaker Nancy Pelosi travels routinely to her home district on a Boeing 757 that costs millions of dollars annually in fuel has resurfaced on Facebook. This is false; Pelosi’s office denied the claim, analyst estimates of fuel costs are far lower, she has not spent each entire weekend in San Francisco, and has flown there commercially in the past.

Pelosi, a Democrat, is the third most powerful US politician and has been the subject of repeated online attacks and false information. 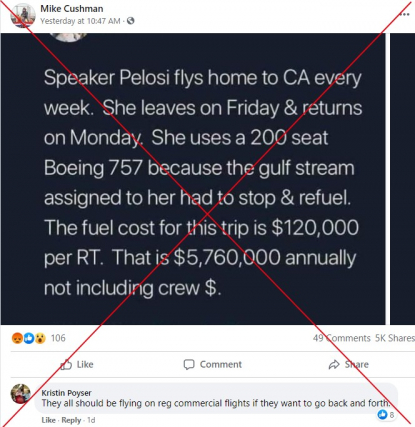 “The claim is false,” Pelosi’s deputy chief of staff Drew Hammill told AFP in an email.

Other posts including this one, as well as here, have shared the untrue accusations.

AFP asked three aviation experts about the round-trip fuel costs of a Boeing 757 flight from the Washington, DC area to San Francisco, and they came back with estimates no more than one-quarter of that stated in the Facebook posts.

John Mowry, a managing director with Alton Aviation Consultancy, figured roughly $25,000 while Douglas Kelly, a senior vice president at AVITAS, Inc, gave a range of $25,000 to $28,000.

Associate Professor Volodymyr Bilotkach, of the Singapore Institute of Technology, estimated around $30,000. “My calculations more or less assume fully loaded aircraft flying under potentially less than favorable conditions,” he said by email.

The posts also falsely claim that the Speaker spends each entire weekend in her district.

For example, on Saturday February 13, 2020 this video shows her in Washington, DC following the impeachment acquittal of former president Donald Trump. Pelosi was also there on Sunday December 20, 2020 with Senate Minority Leader Chuck Schumer, and she held a Washington briefing on Saturday August 22, 2020. Earlier that month on Saturday August 1, 2020 she and Schumer appeared again after meetings in the capital.

The false recurring claim has its origins in a 2007 request by House Sergeant at Arms Bill Livingood that Pelosi, then newly-elected to the Speaker’s post, be able to fly for security reasons non-stop back to her California district in a larger military plane than that used by her predecessor. He lived in Illinois, much closer to Washington, DC.

Tony Snow, a spokesman for Republican President George W Bush’s White House, said Pelosi was entitled to military transport and it was important she had “this kind of protection and travel.”

If her family flew with her, they would have to pay back the travel costs, a Defense Department letter said.

Rumors then emerged that Pelosi regularly flew home on a jet the size of a Boeing 757-200, a medium range airliner that had a range of about 3,900 nautical miles -- more than enough to reach California -- and carried up to 228 passengers.

In 2008 FactCheck.org debunked the claim, finding that Pelosi had only once used a United States Air Force C-32, a specially configured version of the 757, when no other aircraft were available. The C-32 has around 50 seats, not 200 as claimed in the posts.

Known as “Air Force Two” when it is used by the Vice President, a C-32 is also available to the first lady, members of Congress and Cabinet, the Air Force website says.

FactCheck.org said the aircraft Pelosi used most often was a C-20B or C-37A, both of which are much smaller than the C-32 and are variants of Gulfstream jets.

Snopes debunked the claim again in 2019 but it kept circulating. PolitiFact said it was false in June 2020 and quoted a Pelosi spokesperson as saying that, although she had access to military transport due to security protocols in her first years as speaker, she had been flying commercially after that.

The Air Force retired the C-20 from service in 2017 but the C-37, which can carry 12 passengers, is still available to serve “high ranking government and Department of Defense officials,” the Air Force website says.

If Pelosi were to use a military aircraft to return to her district, it would be “on a non-reimbursable basis,” Department of Defense spokesperson Jessica Maxwell told AFP by email. She confirmed that a 2010 DoD directive on support for travel by members of Congress is still in effect, with a 2018 amendment.

Funds will not be provided for members of Congress to travel from Andrews Air Force Base, near Washington, DC to their home district “outside of the Speaker Shuttle,” the directive says.

In the most recent online Statement of Disbursements of the House, covering the quarter ending September 30, 2020,  the Office of the Speaker listed a year-to-date amount for travel of $17,355.95. The bulk of that occurred in the first quarter, where there are several entries for “commercial transportation” in the amount of several hundred dollars.

Screenshot taken February 25, 2021 of a section of travel expenses reported for the Office of the Speaker in the period January 1-March 31, 2020

AFP has debunked numerous other false claims about Pelosi, including that elite US forces took her laptop during the January 6, 2021 riot at the US Capitol, and that she was under arrest. She was also falsely portrayed as a drunk as part of attempts to give credence to the nickname “Crazy Nancy,” which then-president Donald Trump and his supporters used to disparage her.