Multiple Facebook posts shared thousands of times in Thailand in February 2021 claim New Zealand has “returned to normal” as “the majority of people have been vaccinated [for Covid-19]”. The posts shared screenshots of a video featuring New Zealand Prime Minister Jacinda Ardern alongside a claim it shows her "encouraging people to do outdoor activities to prove that New Zealand has finally returned to normal". The claim is misleading: as of February 18, 2021, New Zealand was set to begin offering Covid-19 vaccinations to the general population from February 20, 2021. The screenshots in the posts were actually taken from a video that shows Ardern taking part in a barbecue to celebrate New Zealand’s national day. 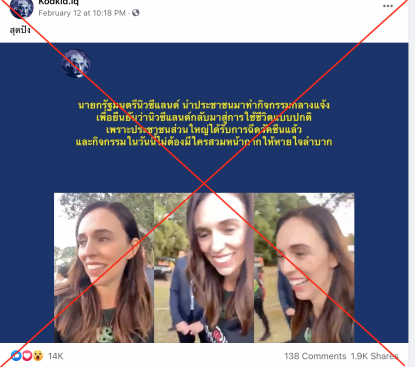 The Thai-language text above the screenshots translates in English as: “The Prime Minister of New Zealand encouraged people to do outdoor activities to prove that New Zealand has finally returned to normal as the majority of people have been vaccinated. During today's activity, no one had to wear a mask to cause them breathing problems."

The post’s Thai-language caption reads in English: “So cool”.

New Zealand has been widely praised for its handling of the pandemic, with just 25 deaths in a population of five million as reported by AFP.

The Pacific island nation was ranked top among 98 countries for its pandemic response, with border closures, “go early, go hard” lockdowns and testing regimes largely keeping the virus at bay.

The screenshots have been shared here, here and here alongside a similar claim.

As of February 18, 2021, New Zealand has not started its Covid-19 vaccination drive. The government announced on February 15, 2021 it had received its first batch of coronavirus vaccines.

Doses of the Pfizer-BioNTech jab would be given out to border and quarantine workers from February 20, after quality control checks, the health ministry said.

New Zealand’s biggest city Auckland began a snap three-day lockdown on February 15 after three family members were found to be infected with that variant of the virus that emerged in Britain.

The New Zealand government still advises people to wear masks or face coverings in addition to basic hygiene measures, in order to protect people against Covid-19. Here is a link to the government’s latest advice as of February 18.

The screenshots in the misleading post were taken from a video that in fact shows Ardern participating in an annual barbecue event on New Zealand’s Waitangi Day.

Google reverse image and keyword searches found this video which was livestreamed on Ardern’s official Facebook page on February 6, 2021.

The video’s caption reads: “Good morning from Waitangi and our annual breakfast!”

The Waitangi Treaty Grounds is where New Zealand's founding document was signed by indigenous Maori and representatives of the British crown in 1840.

Below is a screenshot comparison of images in the misleading post (L) and in Ardern’s livestream (R): 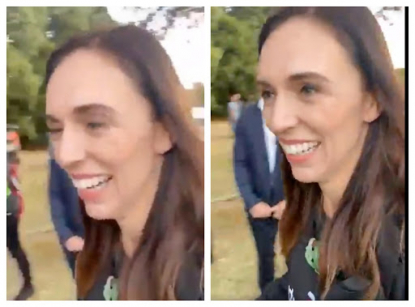 About 2,500 people turned up for the barbecue breakfast, although coronavirus fears prompted groups such as the Maori Party to stay away, TVNZ reported.