Skip to main content
A nurse prepares to give an injection of the Covid-19 vaccine to a health care worker at Ronald Reagan UCLA Medical Center in Westwood, California on December 16, 2020 (AFP / Brian Van Der Brug)

Social media posts warn of rapidly developed pharmaceuticals such as the Covid-19 vaccines by citing thalidomide, a sedative from the 1950s that caused serious birth defects. But the US regulator responsible for approving drugs did not accept thalidomide at the time, regulations have been considerably tightened since, and Covid-19 vaccines are the result of extensive research and were subject to clinical trials and independent review.

“THALIDOMIDE was a RAPID APPROVED drug introduced in 1957 to counteract nausea and insomnia in pregnant women. It was marketed in 50 countries before being withdrawn in 1962 due to malformations in new-borns. Be very careful with what’s coming,” it warns. 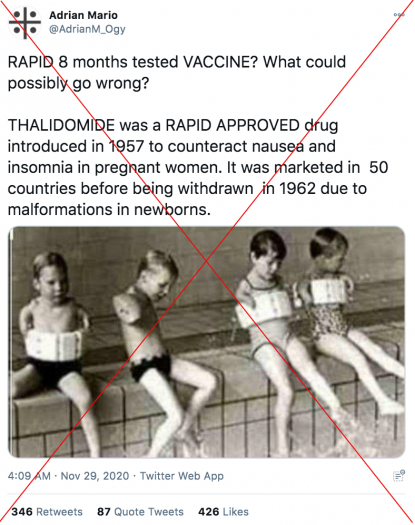 The claims refers to thalidomide, a sedative that caused a health scandal that emerged in 1962, after pharmaceutical companies had marketed the drug in nearly 50 countries. Scientists found a connection between the drug and severe birth defects in thousands of babies.

“In the 1950s, scientists did not know that the effects of a drug could be passed through the placental barrier and harm a fetus in the womb, so the use of medications during pregnancy was not strictly controlled,” the Science Museum of London explains on a webpage dedicated to the history of the drug.

The US also did not authorize the marketing and distribution of the drug in its territory.

Dr. Frances Kelsey, a medical officer responsible for licenses at the US Food and Drug Administration (FDA) at the time, refused to approve the application of thalidomide because of “its inadequate evidence,” and despite “constant pressure” from the pharmaceutical company.

The medical disaster represents a milestone in the history of the agency, as it led to increased support for tighter drug regulation and research on side-effects.

The research around Covid-19 vaccines is “worlds different from what was done with thalidomide,” said Dr Susan Ellenberg, professor of biostatistics, medical ethics and health policy at the University of Pennsylvania’s Perelman School of Medicine.

“Thalidomide was studied in an era when there was very little in terms of regulatory requirements for drug approval,” she told AFP in a phone interview. “Whatever trials were done, they weren’t even required, they were very small.”

For the first US approval of a Covid-19 vaccine, the FDA granted an “emergency use authorization (EUA)” to manufacturers Pfizer and BioNTech in order to respond more rapidly to the public health crisis.

The country began rolling out the Pfizer vaccine on December 14, hoping to have 20 million people immunized by the end of the month.

On December 17, independent experts met again, this time to recommend the approval of another Covid-19 vaccine developed by the biotech company Moderna, expected to become the second one allowed in the country.

According to Ellenberg, the exceptional interest in the worldwide pandemic also contributed in accelerating the development of the vaccine: “It was not hard to sign people up” for the trial.

“Typically, you would not have entered thirty thousand people in a clinical trial over a period of two or three months,” she explained, while it more often takes a year to gather the amount of people required for drawing conclusions about the study.

“Important safety checks remain in place. The FDA’s review teams continue, as they have always done, to comb through the data submitted by companies regarding their medical products,” he said.

“We are now in the midst of a pandemic, it’s affected every country across the globe… And now, we have vaccines that seem to be highly effective and have more safety information than probably any other vaccine that’s been studied. If people want normal lives to resume, they should be getting this vaccine,” she said.

The novel coronavirus has killed more than 310,00 people in the United States -- the world’s highest death toll from the pandemic.

AFP Fact Check has debunked other examples of inaccurate information about Covid-19 vaccines including that they cause female sterilization or change a patient’s DNA.