Skip to main content
An Indonesian policeman guards outside a metal gate at the Cilacap port, the only gate to the country's highest security Nusakambangan prison, where executions are usually carried out, on July 25, 2016. (AFP / Bayu Nur)

Multiple social media posts have shared a claim that death row inmates in Indonesia are individually responsible for paying around 200 million rupiah ($13,700) to cover the expenses of their own executions. This claim is false: the expenses are covered by the Indonesian government.

This Instagram post, dated April 11, 2021, shares a black-and-white photo of a man shot by a firing squad with an Indonesian-language text superimposed on the image. The post has attracted more than 24,000 likes. 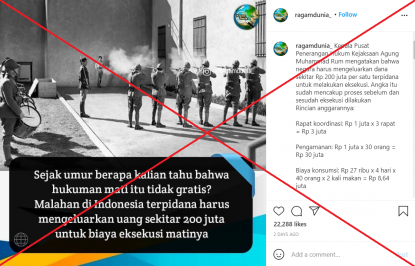 Translated to English, the text on the photo reads: “How old were you when you knew death penalty is not free? Even in Indonesia, convicts themselves have to pay around 200 million for their own executions.”

The post’s lengthy caption purports to quote an official from the Indonesian Attorney General’s Office, saying that the state spends around 200 million rupiah ($13,700) per execution. It also includes a list purportedly detailing the costs, such as coordination meetings, security fees, transportation and burial.

The caption ends by saying that the source for that information is Tempo.co, an online news portal in Indonesia, without giving a link to any particular article.

A keyword search found this article published by Tempo.co on July 25, 2016.

Titled “Death Execution Is Not Cheap, These Are Details of the Expenses”, the report quotes an official from the Attorney General’s Office, Muhammad Rum, who is also mentioned in the misleading post.

The report partly says: “The Attorney General’s Office spokesman Muhammad Rum said that the state has to pay around 200 million rupiah for an execution for one death row inmate. Such an amount, he explained, covers expenses for activities conducted before and after the execution.”

It also lists the breakdown of the costs, as detailed in the misleading post.

Rum’s explanation about the costs of executions was also reported by local media IDN Times.

Both articles do not mention that death row convicts need to pay for their own executions.

The costs of executions in Indonesia are covered by the country’s government, said Muhammad Afif, director of LBH Masyarakat, a Jakarta-based legal aid centre that has handled death penalty cases in the Southeast Asian country.

“The amount around 200 million rupiah is allocated for one [death row] inmate. If there is any cost covered by the inmate’s family, that’s fees for things outside the execution, such as the delivery of the body to the country of origin,” Afif told AFP in a WhatsApp message on April 22, 2021.