A video has been viewed thousands of times on Facebook and Twitter, alongside a claim that it shows a mob storming a polling station during elections in India’s West Bengal state in 2021. But this claim is false: the video has circulated online in unrelated news reports since 2019 about poll violence that happened in a different Indian state.

The video circulated amid ongoing legislative elections in the eastern Indian state, where incumbent leader Mamata Banerjee looks to fend off a challenge from the country’s ruling Bharatiya Janata Party.

Cooch Behar, misspelled “coochbihar” in the video’s caption, is a district in West Bengal. 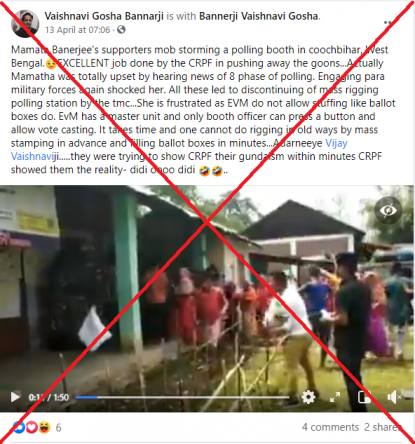 An identical video was published on April 18, 2019 on the verified YouTube channel of local media India Today.

EVM is an abbreviation for Electronic Voting Machine.

Below shows screenshot comparisons of the video in the misleading posts (L) and the India Today video (R): 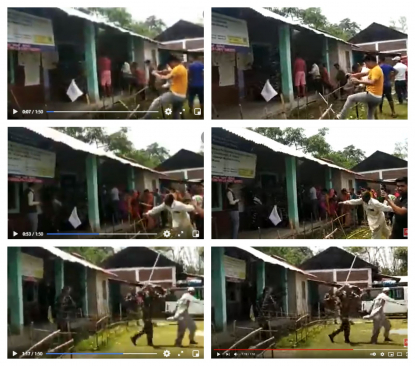 The video was also shared on the YouTube channel of The New Indian Express on April 18, 2019.

The poll disruption incident shown in the video was covered by local media organisations NDTV and EastMojo on the same day.

The video was not filmed in Cooch Behar district in West Bengal, as the misleading posts allege.

The video’s 54-second mark shows a building with a sign that reads in part: “Kiyamgei.” 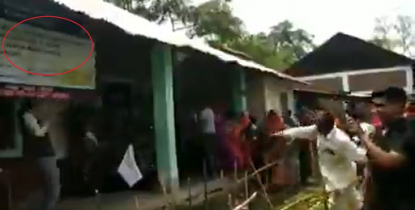 Screenshot of the video in the misleading posts, with the name of the building circled

The name corresponds to this location on Google Maps in the state of Manipur, more than 700 kilometers away from Cooch Behar in West Bengal.