Skip to main content
Voters stand in a queue at a polling station to cast their ballot during the 5th phase of West Bengal's state legislative assembly elections in Kolkata. (AFP / Dibyangshu Sarkar)

As millions head to the polls for India’s West Bengal elections, a purported newspaper clipping surfaced in online posts that claim the former head of the Indian election commission admitted the ruling Bharatiya Janata Party (BJP) hacked voting machines in state assembly polls in 2017. The claim is misleading: AFP found no evidence that the purported report was taken from a genuine newspaper. The purported quote previously circulated in a 2017 report on a now-defunct website. The election watchdog said the purported comments were “fake news”.

The purported newspaper clipping was shared here on Facebook on April 11, 2021.

"EVM" refers to Electronic Voting Machines, battery-powered devices that were first trialed in India in 1982. 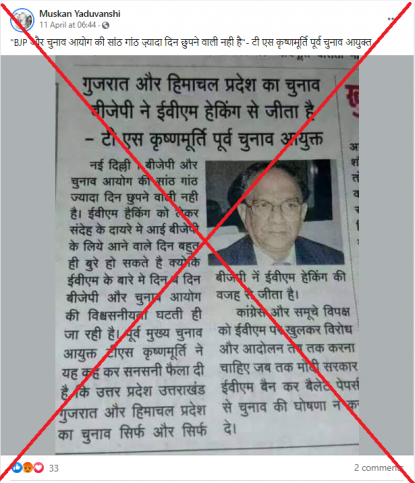 No newspaper title is included in the screenshot of the purported newspaper clipping.

The Facebook post’s Hindi-language caption reads: “The nexus between the BJP and the Election Commission is not going to be hidden for long” -- former election commissioner T S Krishnamurthy.

BJP refers to India's ruling Bharatiya Janata Party, while T. S. Krishnamurthy served as chief of the Election Commission of India (ECI) from February 2004 to May 2015.

The purported newspaper clipping -- which was also shared here, here and here -- surfaced as India’s West Bengal, home to 90 million people, votes in a state election where the ruling All India Trinamool Congress party looks to fend off opposition from Prime Minister Narendra Modi's BJP.

The headline refers to Gujarat and Himachal Pradesh state assembly elections held in December 2017 and won by the BJP.

AFP found no archived newspaper online that directly corresponds with the purported report in the misleading posts.

The same purported newspaper story has circulated online for at least four years. It was published by a now-defunct website in December 2017.

In response, the ECI and its former chief have both said that the claim is false, as reported by local media here and here.

“The Election Commission of India (ECI) has taken a strong note of the fake news about EVM Hacking attributed to former Chief Election Commissioner (CEC) TS Krishnamurthy circulated on some social media platforms and the Internet,” Times Now reported on March 11, 2021.

The election watchdog body said in a statement it would take “stern action” against the “fake news”. 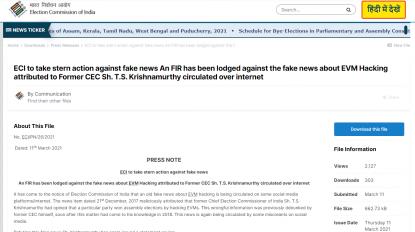 Screenshot of the ECI statement

“It has been brought to my notice that a fake news which had appeared in a Hindi newspaper quite some time back is being activated and re-circulated as if that I express doubts about the credibility of the Electronic Voting Machine, EVM, in the conduct of elections in India,” the statement quotes Krishnamurthy as saying.

“This is utterly false and mischievous to circulate a wrong impression in the ensuing elections. I would like to reiterate that the EVMs are most credible and I have no doubt about its efficacy and reliability.”