A satirical group confirmed that they had started the petition

A petition calling for the name of popular Australian snack fairy bread to be changed has been shared widely online, prompting outrage from social media users. However, the petition was started by a satirical group. There is no real campaign to change the name of Australia’s “beloved” snack.

The claim was shared in a Facebook post published on April 16, 2021. The post features an image of fairy bread -- a slice of white bread with coloured sprinkles on top -- with the logo of Australian news website news.com.au.

“Calls to change name of beloved Aussie food,” the text across the image says.

“OMG HAS THE WORLD GONE MAD?” the Facebook post reads. “Does Everything Need To Be Rename These Days? (sic)”

“There's a petition to change the name of one of Australia's favourite party foods, fairy bread because apparently the word "fairy" is "oppressive"”. 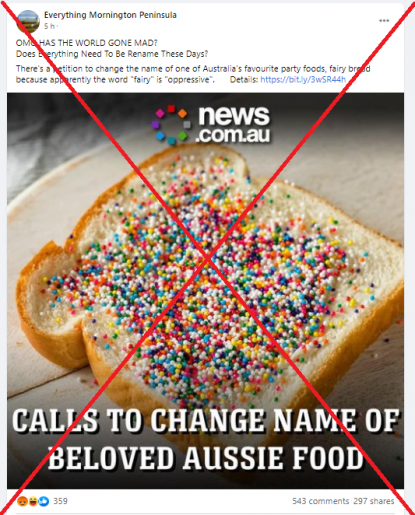 The image and claim have also been shared here and here on Facebook.

The claim stems from this Change.org petition, which calls for the name of the party food to be changed.

“ATTENTION: After spending my life abstaining from 'fairy' bread, I have been fed up for too long. The term 'fairy' is offensive and outdated, and should not be used to refer to a classic Australian food,” the tweet reads.

However, the claim originated from a satirical group.

A reply to the Alexis Chaise tweet here on April 6, 2021, pointed to the possibility that the petition was started by Australian satirical group, The Chaser.

People are falling for the @alexischaise thing hook line and sinker. Not even questioning why it showed up in their timeline pic.twitter.com/tp4xg68KcR

The Chaser confirmed to AFP in an email on April 16, 2021 that it was behind the petition, and the Alexis Chaise Twitter account.

The group said the aim of the petition was to ridicule media outlets owned by News Corp founder Rupert Murdoch.

The name Alexis Chaise, the group said, “is named after a couch from Wayfair.com (which was briefly a subject for a QAnon conspiracy theory last year).”

The profile picture of the Alexis Chaise Twitter account was obtained from thispersondoesnotexist.com, an online generator that uses artificial intelligence to create images of human faces, the group added.

“Yes the fairy bread thing was us. Video coming shortly,” the tweet reads.

Yes the fairy bread thing was us. Video coming shortly.

Australian radio host, Ben Fordham, also pointed out the dubious nature of the petition during his show on April 8, 2021.

“I think the idea is to try and fool the media into thinking this campaign is legit,” Fordham said. “I’m pretty sure ‘Alexis Chaise’ is a type of couch.”