Skip to main content
A Palestinian man covers his face as he sits by a tent across from the rubble of buildings destroyed by Israeli strikes, in Gaza City on May 23, 2021. - Gazans started piecing back their lives after a devastating conflict with Israel that killed more than 200 people and made thousands homeless in the impoverished Palestinian enclave. (Photo by Mohammed ABED / AFP)

Multiple Facebook posts have shared an image that they claim shows a child caught in the Israel-Hamas crossfire. The claim is false: the image shows a child wounded in a military campaign in Syria in October 2012.

It has been overlaid with Tagalog and English-language text that states: “A child in Palestine Gaza told a journalist, ‘[I swear by Allah] I will tell Allah the story of everything that has happened to us.’ THE WORLD IS BLIND WHEN IT’S MUSLIM WHO ARE INVOLVE [sic]. PrayforPalestine.” 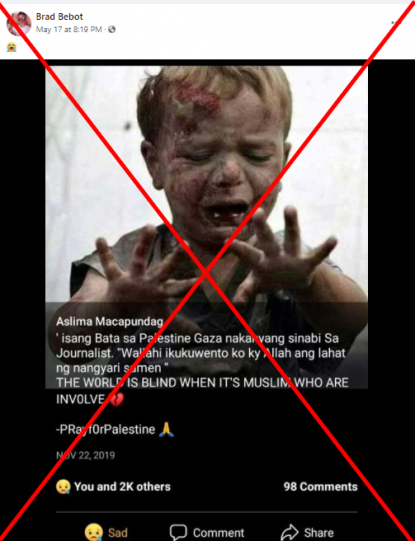 A screenshot of the misleading post taken on May 24, 2021

The photo circulated online as deadly clashes escalated in Gaza in May 2021. AFP reported on the violence here. A ceasefire came into force on May 21.

An identical image was also shared alongside a similar claim here and here on Facebook.

A TinEye reverse image search found the image was captured by war photographer Sebastiano Tomada in a hospital in Aleppo, Syria on October 3, 2012.

Tomada’s photograph was published here on the Getty Images website.

The photograph's caption reads: “ALEPPO, SYRIA - OCTOBER 3: As Bahar Al Assad's army steps up its military campaign to regain control of Aleppo, a severely wounded baby awaits to be medically treated by the small staff of doctors in one of the city's last standing hospitals. October 3, 2012.”

Unrest in Syria began in March 2011 and has since turned into the planet's worst conflict in a generation, AFP reported. Almost 400,000 people were killed in 10 years.

Below is a screenshot comparison of the image in the misleading posts (L) and the Getty Images photograph (R):

The same photograph was also published with the correct caption here by Sipa Press, a French photography agency, on October 3, 2012.

Tomada described the wounded child in the photograph in an interview with TIME magazine published here on December 10, 2012.

He told the magazine: "I don't think the child in this photo knew what had just happened to him or knew that his father and himself were the only survivors of a large-caliber artillery round that crashed through his house.

"At one of the city's last standing hospitals, the child kept looking at his hands as if to say, 'What is this red liquid on my hands? What is happening to me?'"