A quote about divisions in society has been shared thousands of times in multiple Facebook posts which claim these are the words of former South African president Nelson Mandela. The claim is false; AFP Fact Check traced the purported quote to a tweet shared by Mohamad Safa, a permanent representative to the United Nations. Also, the Nelson Mandela Foundation confirmed the words were not Mandela’s.

“This Nelson Mandela quote is the top trending post on our social network this morning,” reads the caption.

Mandela is again credited at the end of the quote. 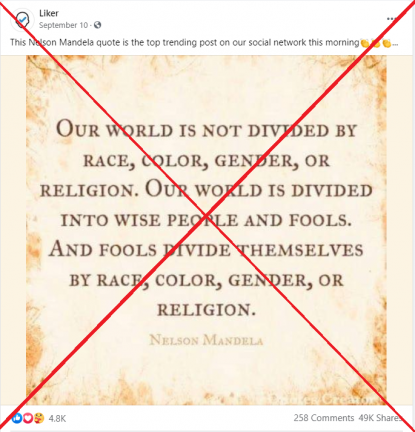 The same claim was also shared here on Facebook in Ethiopia.

A quote by Nelson Mandela?

AFP Fact Check discovered that the quote was wrongly attributed to Mandela and was first shared in a tweet on August 7, 2020, by Mohamad Safa, a permanent representative to the United Nations.

A member of Safa’s media team told AFP Fact Check in a message sent on October 7, 2020, that “we would like to emphasise that these words were said by Mr. Safa”.

“Misleading information spreads all over the Internet about this tweet of Mr. Safa, and there are those who attributed it to Nelson Mandela and others attributed it to themselves,” Safa’s spokesperson said.

Furthermore, Safa published a post on his official Facebook page on September 6, 2020, clarifying that the words widely shared online were, in fact, his. 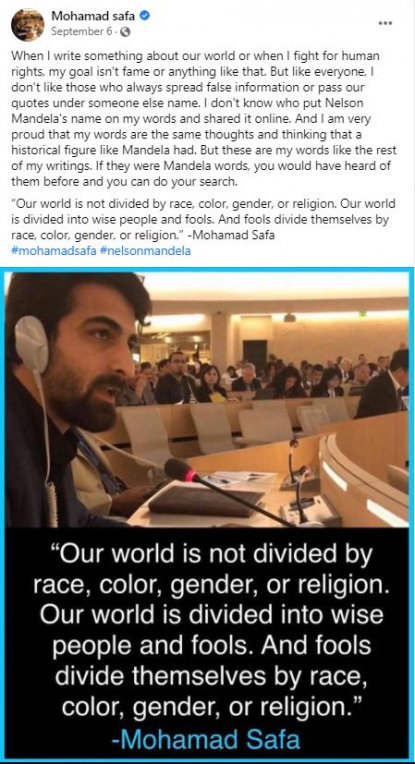 “I don't like those who always spread false information or pass our quotes under someone else name,” he wrote on Facebook. “I don't know who put Nelson Mandela's name on my words and shared it online.”

Safa’s post clarifying ownership of the quote was shared more than 500 times.

Rania Saleh, the director of archive and research at the Nelson Mandela Foundation in South Africa, confirmed the quote was not Mandela’s.

“It’s definitely not a Madiba quote,” she told AFP Fact Check. “I responded to somebody else a few weeks ago who wanted to use the same quote. This is the third time somebody is asking me about the same quote.”

Saleh described how, when verifying quotes attributed to Madiba (Mandela’s clan name), she consults a database with more than 1,500 of Mandela’s speeches, including forewords and interviews.

“I also check Long Walk to Freedom -- sometimes a lot of quotes come from his autobiography and various other sources. We also have something called Nelson Mandela by Himself: The Authorised Book of Quotations, that's a compilation of over 2,200 of Mandela’s quotes and then I also do a general search in case it might be a source which we haven’t had.”

Saleh said that misattributed Mandela quotes are recurring, although rarely are they damaging to Mandela’s image as they tend to be about subjects like corruption, inequality or justice, topics he often discussed.

“Every now and then, we do get requests to use a quote which is not Madiba’s,” said Saleh. She added that when they are unable to authenticate a quote, then they refuse permission.