A quote, misattributed to the seventh prime minister of Canada Wilfrid Laurier, that was once shared via email chains is now circulating on Facebook. The quote, which calls for immigrants to assimilate is actually an excerpt from a letter written by former US president Theodore Roosevelt in 1919.

“We must insist that the immigrant that comes here is willing to become a Canadian and is willing to assimilate our ways, he should be treated on equal grounds and it would be shameful to discriminate against such a person for reasons of their beliefs or the place of birth or origin. But is is the responsibility of that person to become a Canadian in all aspects of life, nothing else but a Canadian. There can be no divided allegiance here. Any man who says that he is a Canadian, but tries to impose his customs and habits upon us, is not a Canadian. We have room for only one flag, the Canadian flag. There is room for only two languages here, English and French. And we have room for loyalty, but only one, loyalty to the Canadian people. We won’t accept anyone, I’m saying anyone, who will try to impose his religion or his customs on us.” 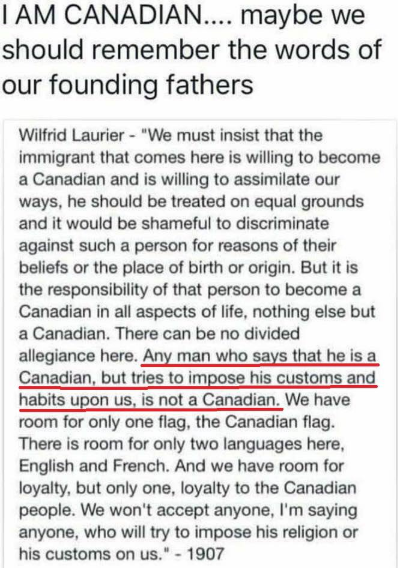 Similar versions tying the quote to Laurier have been shared in other formats, as this tweet from 2015 shows. Prior to that it spread via email chains, according to this 2011 article. Several opinion columns in Canadian newspapers have since used the misattributed quote to make points about immigration.

However, Laurier, the prime minister of Canada from 1896 to 1911 who is known for reconciling English and French interests in order to promote Canadian national unity, is not the author of the quote and the quote from 1919, not 1907.

The quote is an excerpt from a letter written by former US president Roosevelt to Richard Hurd, chairman of the American Defense Society, a nationalist US political group active in the first half of the 20th century, of which Roosevelt was the honorary president. 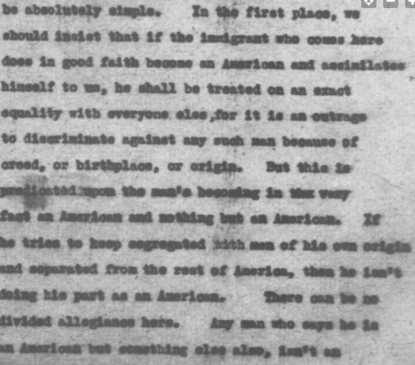 The texts are nearly identical, but American has been replaced with Canadian. The original letter also does not make any mention of religion.

The letter is known as Roosevelt’s last speech under the name “Keep up the fight for Americanism.” It was read the American Defense Society’s All American benefit concert” in New York City on January 5, 1919, the day before Roosevelt’s death, as the text below this memorabilia portrait of the former president points out. 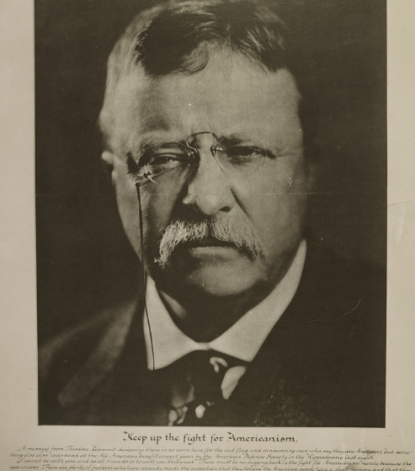 A speech by Laurier on Alberta’s entry in the Canadian Confederation on September 1, 1905, suggests that Laurier’s ideas on citizenship at that time differed from the content of the Roosevelt quote.

It is also a misstatement to refer to Laurier as a “founding father,” a term which is commonly used to refer to the men who crafted the United States constitution. Laurier, though prominent as the first French-Canadian prime minister post-Confederation, is also not considered one of Canada’s Fathers of Confederation.