Purported Nazi symbol stokes conspiracy theory about CPAC in US

Social media posts claim that the stage at a major US conservative political conference was deliberately shaped like a Nazi symbol. But the stage was designed by a small company that said it was unaware of the shape’s Nazi connotation, and conference organizers told AFP the similarity was not intentional.

“Hidden message to white supremacists @cpac,” wrote an Instagram user in a February 26, 2021 post featuring a photo of the stage used at the 2021 Conservative Political Action Conference (CPAC), just above an image of a Nazi flag with the swastika replaced by an odal rune.

The odal rune was originally an early Germanic symbol that was later used by some SS divisions and is classified as a Neo-Nazi symbol by the Anti-Defamation League. 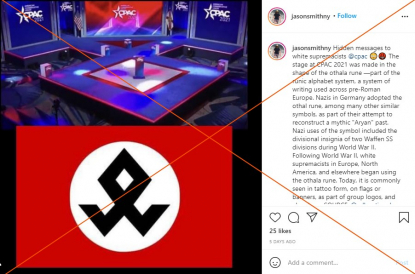 Hundreds of social media users made similar points in the last days of February, on Facebook and Twitter after Twitter user @hami first pointed out the similarities in designs on February 26, 2021. One podcast company that interviewed @hami wrote that CPAC’s “use of the shape was intentional and purposeful.”

CPAC is one of the country’s largest annual gatherings of political conservatives, and this year saw Donald Trump take the stage for the keynote speech, his first since leaving the White House.

Facebook page Occupy Democrats, whose post comparing the stage and symbol was shared 21,000 times, did not make explicit statements on CPAC’s intentions. Still, its followers appear to have largely taken the supposition as a fact. “We all know exactly why they do this,” one commented. “They’re showing their true colors and affiliation,” another wrote.

The online attention led mainstream media to cover the theory, prompting the Hyatt hotel chain, whose services CPAC used for the convention, to issue a statement denouncing the “abhorrent” symbol.

While the stage at CPAC’s 2021 convention does somewhat resemble the odal rune (highlighted by AFP in red in the photo below) with the exception of a walkway at the back (in green), no evidence suggests that the similarities between both designs were intentional. 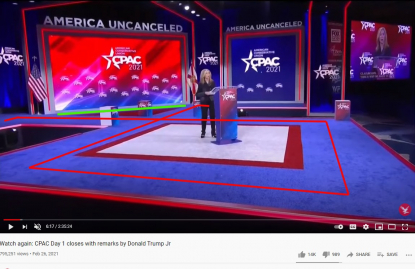 Matt Schlapp, chairman of the American Conservative Union (ACU), which organizes CPAC, said on Twitter as early as February 27, two days after the conference began, that “stage design conspiracies are outrageous and slanderous.”

Ian Walters, spokesman for the ACU and CPAC, told AFP by phone that the contractor Design Foundry made several proposals for the stage, one of which was chosen and then adapted to the space of the ballroom that hosted CPAC at the Hyatt Regency in Orlando, Florida.

“For the purposes of the event, all of our collaboration is centered less around aesthetics and more about logistics,” Walters said, adding that Design Foundry had worked with CPAC since 2014, in order to make its stages more appealing for television viewers.

Design Foundry took responsibility for the stage, and said in a statement that it “had no idea that the design resembled any symbol, nor was there any intention to create something that did.”

The company said that the design was “intended to provide the best use of space, given the constraints of the ballroom and social distancing requirements.”

ACU’s Waters said of the online claims, “I think it’s a ridiculous proposition that somehow we tried to, you know, wink and nod at people that hold views antithetical to our own.”

He added that CPAC had worked closely with the Hyatt Regency while creating the stage, to which Hyatt spokeswoman Alissa Stevens responded with a statement pointing out the hotel was not aware of the symbol’s connotation until the convention had already started.

“When we learned that CPAC 2021 stage design had been compared to a symbol of hate, we promptly raised this concern with meeting organizers who strongly denied any connection to such symbols,” the statement said.

Mike Rothschild, a journalist who specializes in conspiracy theories, said via Twitter that “I don’t believe for a second DF (Design Foundry) intentionally designed an obscure Nazi rune into their stage design.”

Both Rothschild and Walters added that despite being World War II history buffs, they had personally never heard of the odal rune.