Social media users shared a photo of evangelical leaders paying homage to a golden statue of Donald Trump at the Conservative Political Action Conference in Orlando, Florida. But the image has been altered; the original photo was taken more than a year ago, and the golden statue, a talking point at CPAC in 2021, was substituted in place of Trump himself.

“Caption this photo taken today of CPAC’s evangelical leaders. Yes, they are praying to a golden statue of their holy insurrectionist,” says a February 28, 2021 tweet that used the misleading image. 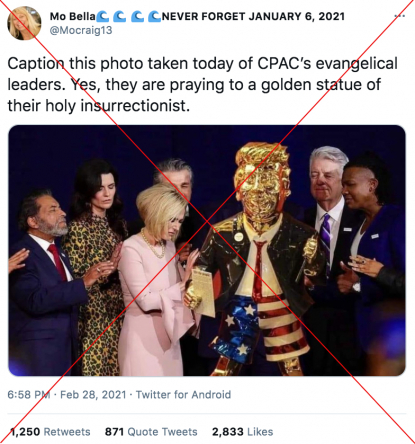 Other examples of the claim can be found on Facebook, here and here.

But a Google reverse image search shows that the original photo was taken in January 2020 at an “Evangelicals for Trump” campaign event in Miami, Florida by Associated Press photographer Lynne Sladky.

It shows the then president surrounded by faith leaders during a prayer. Almost identical photos of the event by photographers Marco Bello for Bloomberg and Scott McIntyre for The Washington Post can also be found here and here. 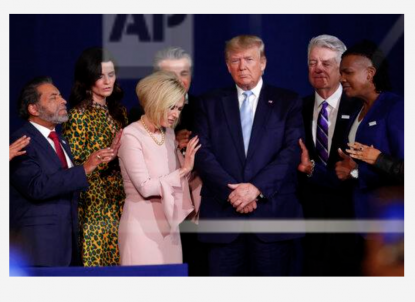 A screenshot of an AP photo by Lynne Sladky

The shiny gold-colored statue does not appear in the original photo. It was first introduced at CPAC 2021, where enthusiasm for Trump remained high despite his departure from office after losing to Joe Biden in 2020’s presidential race.

The statue led to mockery on Twitter here, here and here, with references to the “golden calf” from the Bible.

In the Old Testament, “worship of the golden calf is seen as a supreme act of apostasy, the rejection of a faith once confessed,” a definition in the Encyclopaedia Britannica reads.

A Twitter user, under the name of Carl T. Bergstrom, explained in a March 1 thread that he posted the misleading photo and later deleted the image to avoid further confusion.

“I posted a photoshop of the golden Trump statue (left) into the famous photo of evangelicals praying over Trump (right). I thought the reference was clear, but it’s causing confusion. I’ve deleted. AFAIK, no one prayed over a golden Trump statue. In public, anyway,” he said in a tweet.

Contacted by AFP, Bergstrom said that he was not the creator of the photoshopped image but that he “posted it with a joke about the golden calf, and deleted it a couple of minutes after posting because people seemed to think it was real,” he said.

At CPAC, Trump repeated false claims that he won the election instead of Biden, aiming to retain his hold on the Republican Party and leave open the chances of a White House challenge in 2024.