A collage of seven photos featuring Bavarian Minister-President Markus Söder receiving vaccinations has been shared hundreds of times on Facebook, purporting to show the evidence of “fake jabs” as countries including Germany and Australia roll out their Covid-19 vaccination campaigns. The claim is misleading: the photos actually show Söder receiving different vaccinations at separate events between 2009 and 2020.

Text across the top of the image says: “This guy has had 7 ‘jabs’”. 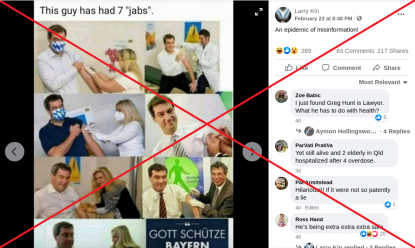 The post's caption reads: "An epidemic of misinformation!"

Facebook users who shared the misleading compilation image posted captions indicating they believed it proved that vaccinations were being staged.

The claim, however, is misleading. The images actually show Bavarian Minister-President Markus Söder receiving seven different vaccinations at separate events between 2009 and 2020.

AFP has numbered each image in the post to their corresponding source. 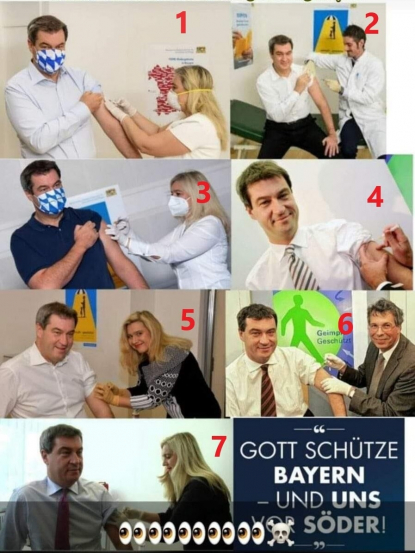 Image No.1 can be seen in a tweet published by Söder on May 28, 2020, showing a vaccination from ticks.

He wrote in the tweet: "Tick vaccination with Bavaria's Health Minister Melanie Huml. Vaccination protects. Bavaria is a tick area - a vaccination can prevent the worst diseases. Therefore, please get a booster regularly. We don't want compulsory vaccination, but nobody needs to be afraid of vaccination."

Huml was Bavarian State Minister for Health and Care until January 2021, and is also the doctor shown vaccinating Söder in several images.

Image No.4 was published in an article by Bavarian newspaper Merkur on September 22, 2009, showing Söder’s vaccination against swine flu.

The post reads: "Vaccination against flu: Flu is often underestimated and can have serious consequences. Vaccination, on the other hand, offers good basic protection every year. Therefore my recommendation: get vaccinated now!"

Image No.3 was taken by German news agency Deutsche Presse-Agentur on October 6, 2020, as per an entry on stock image site Alamy.

In Germany, at least 3.8 million people have received at least one dose of the vaccine as of February 26, 2021, according to government data here.

In Australia, where its Covid-19 vaccination program began on February 22, 2021, 33,702 people have received a vaccination as of February 28, 2021, as per the country’s Department of Health.

The misleading claim has been previously debunked by AFP in German here.