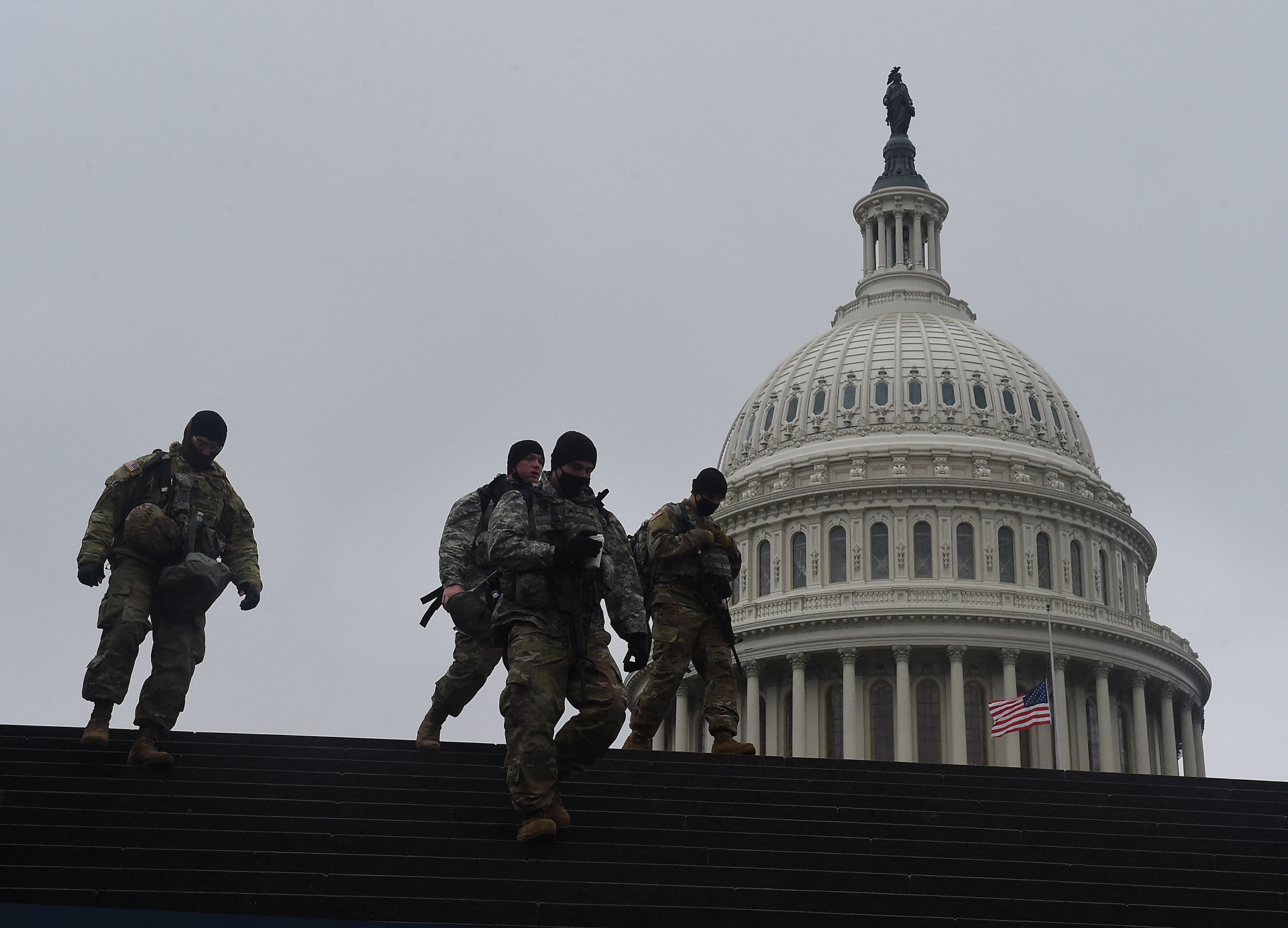 National Guard members at the US Capitol on February 11, 2021 (AFP / Olivier Douliery)

Pelosi did not reject appeals for troops to secure US Capitol

Facebook posts claim that House Speaker Nancy Pelosi refused six pleas from the sergeant at arms for National Guard troops to be deployed at the US Capitol, the scene of deadly violence on January 6, 2021. This is false; the petitions came from a different security official, the House sergeant at arms testified he faced no delay from Pelosi, and she is not on the board in charge of Capitol Police that sought the military aid.

“Sergeant at Arms asked for the National Guard 6 times. NANCY SAID NO!!! She was behind the whole thing!!” says a February 16, 2021 Facebook post referring to Pelosi. 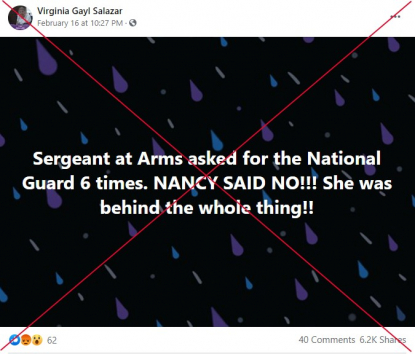 The claim, shared more than 20,000 times as Congress reviews security failings surrounding the violence, appears elsewhere on Facebook, including here, here and here.

The riot by supporters of then-president Donald Trump led to the resignations of Capitol Police Chief Steven Sund, House Sergeant at Arms Paul Irving and his Senate counterpart Michael Stenger.

It also raised questions in Congress about why the National Guard’s deployment was delayed and sparked bipartisan calls for a probe into the failings, similar to that which followed the 9/11 terrorist attacks in 2001.

Although the claims do not specifically mention January 6, comments on the posts make clear that readers understood them to be referring to the events of that day.

But it was Sund, not Irving, who made the multiple requests for assistance from the National Guard.

On January 10, 2021 Sund told The Washington Post that on January 4 he asked Irving and Stenger for the National Guard to be on standby two days later when Congress would meet to certify Joe Biden’s presidential election victory.

They turned him down, Sund told the newspaper, adding that he pleaded for help five more times as events unfolded during the unrest.

Sund resigned on January 7. His successor, Acting Capitol Police Chief Yogananda Pittman, told a February 25 congressional hearing into the riot, starting around the 34:08 mark of this video, that between 12:58 pm and 1:45 pm on January 6 Sund made six requests for Guard support -- five to Irving and one to Stenger.

In a February 1 letter to Pelosi and in Senate testimony, Sund confirmed the unsuccessful requests for the troops that he made on January 4. He said he “urgently” sought Guard backup several times from 1:09 pm on January 6, including through the two sergeants at arms and during a call with military officials.

The first troops arrived at the Capitol at 5:40 pm, the Defense Department said.

In that letter and in testimony by Sund, Irving and Stenger to Senate committees on February 23, there is no suggestion that Pelosi vetoed a request for Guard troops.

“The Speaker’s Office has made it clear publicly and repeatedly that our office was not consulted or contacted concerning any request for the National Guard ahead of January 6th,” Pelosi’s Deputy Chief of Staff, Drew Hammill, told AFP by email.

Irving testified that he notified “House leadership” after Sund informed him on January 6 that conditions were deteriorating and Sund might need to ask for help from the Guard.

Republican Senator Josh Hawley asked Irving to confirm that he didn’t “wait for the input of the Speaker or the majority leader or anybody else?” to which Irving replied: “Absolutely not.”

The former sergeant at arms told Republican Senator Ted Cruz that it was only on January 6 that he “alerted (congressional) leadership that we might be making a request” for the Guard. “And that was the end of the discussion.”

Sund told the Senate hearing that he “cannot request the National Guard without a declaration of emergency from the Capitol Police Board.”

That body, chaired at the time by Stenger, includes the two sergeants at arms, the Architect of the Capitol, and the Capitol Police Chief who holds a non-voting ex-officio role. The Board -- not any one individual -- has ultimate responsibility for Capitol security, Sund testified.

Under 2 USC Chapter 29, legislation governing the Capitol Police, before requesting Defense Department assistance the Capitol Police Board shall consult congressional leadership “except in an emergency,” Section 1970 says.

According to the Department of Defense (DoD), only “federal officials or agencies” can request Guard support for protecting federal monuments and lands in the District of Columbia.

AFP asked DoD whether the Speaker of the House or Capitol Police and their board qualify as federal agencies.

AFP Fact Check has debunked other disinformation about Pelosi as well as the January 6 riot.