A post shared dozens of times on Facebook claims to show violent clashes between civilians and security forces in Uganda following the recent presidential election. The claim is false; the images are of a caravan of Honduran migrants who were blocked by Guatemalan soldiers upon entering the country. 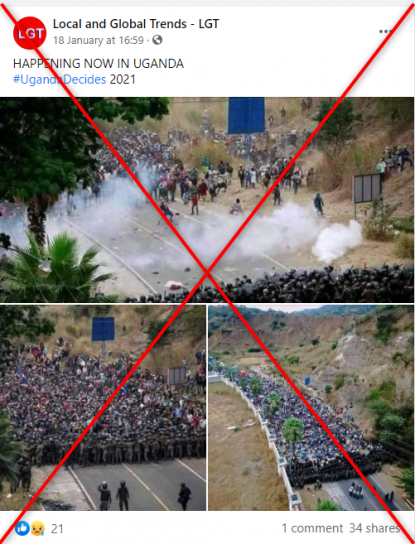 The same claim was shared in other Facebook posts here and here.

Tensions during Uganda’s presidential election last week led to the harassment and arrest of opposition members, attacks on the media, a government-imposed internet blackout, and at least 54 deaths, as AFP reported here. The pop-star-turned politician Bobi Wine campaigned to defeat Uganda’s long-serving president, Yoweri Museveni, but was ultimately unsuccessful.

The images depict a large caravan of Honduran migrants who were tear-gassed by Guatemalan soldiers on January 18, 2021, when they entered the country on their journey to the United States.