This photograph was taken back in 2018

A photograph shared hundreds of times on Facebook purports to show troops burying civilians killed in a massacre in Cameroon on February 14. Opposing sides in the country's separatist conflict have used the picture to blame each other for the attack. However, the photo was taken back in 2018.

The photograph has been shared more than 700 times on Facebook in English and French.

Supporters of Cameroon's English-speaking separatists -- who are fighting for independence from the majority French-speaking country -- claimed the photograph showed members of the armed forces burying civilians they had allegedly killed in recent clashes.

"LRC (Republic of Cameroon, editor's note) soldiers here caught in an act of cover up in one of the communities were they have committed mass murder (sic)," reads the caption on a Facebook post, archived here.

Other Facebook users said the photo showed the armed forces helping separatists bury their dead after "infighting" and "genocide against their own pipo (sic)". 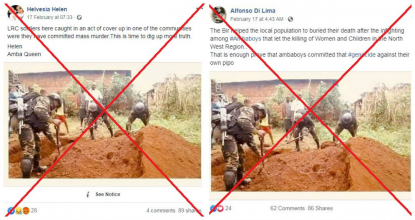 The United Nations' rights office said armed men killed 23 civilians, including 15 children, on February 14 in the village of Ntumbo in Cameroon's Northwest region, one of two English-speaking regions gripped by conflict since separatist leaders issued a symbolic declaration of independence in October 2017.

Pro-separatists blamed the killings on the army, which in turn denied any involvement. Army spokesman Colonel Cyrille Atonfack Guemo argued that the villagers died in "an unfortunate accident" when fuel exploded in an exchange of gunfire with separatists.

The United Nations called on Cameroon to launch an independent investigation into the "shocking" killings. 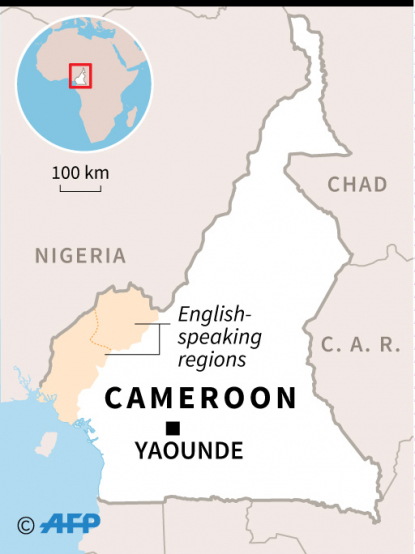 However, the photograph was taken many months before the massacre in Ntumbo.

AFP ran a reverse image search on Google, which revealed several photos -- including the one of the men digging -- published on September 1, 2018 on the Cameroonian army's Facebook page. 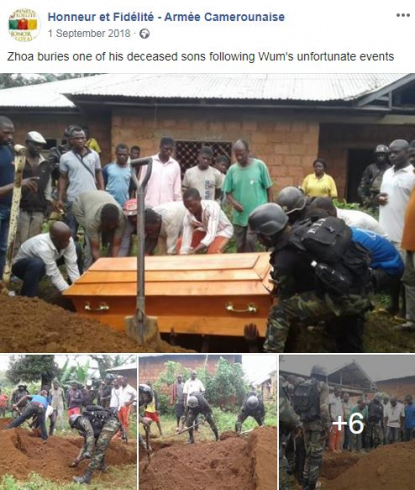 A screenshot of photos on the Cameroonian army's Facebook page, taken on February 26, 2020

The green, red and yellow badges on the men's uniform and their helmets, which bear the acronym 'BIR', indicate that they belong to Cameroon's elite military force, the Rapid Intervention Battalion.

Analysis of photographs on the Cameroonian army's Facebook page

The photograph also appears in an article (in French) from September 3, 2018 reporting the funeral of three people found dead in Wum in Cameroon's Northwest region.

"Members of the Rapid Intervention Batallion (BIR) staying in the area lent a hand to the grieving community during the funeral on Saturday," claims another article (in French). It said three young men had been killed -- along with two police officers and a dozen secessionists -- during violence between August 24 and 25, 2018 in the neighbouring towns of Wum and Zhoa.

AFP reported on the police officers' deaths at the time.

AFP Fact Check has debunked several false and misleading posts on separatist violence in Cameroon, including here and here.