No, this minister did not beg for forgiveness for atrocities in anglophone Cameroon

Videos supposedly showing Cameroon's minister for terroritorial administration, Paul Atanga Nji, apologising for atrocities in the country’s two anglophone regions have been viewed thousands of times on social media. But the videos are misleading -- they only show a brief excerpt of Atanga Nji’s speech. In the full version, it is clear that Atanga Nji is demanding an apology from armed separatist groups, not apologising himself.

Cameroon’s anglophone regions, in the northwest and southwest of the country, have suffered repeated clashes between the military and armed separatist groups since October 2017. More than 2,000 people have been killed, according to Human Rights Watch, while the UN estimates that more than 530,000 people have been forced to leave their homes.

“What a horrible confession from Atanga Nji paul in broad day light,” read the caption on one post which we’ve archived here. 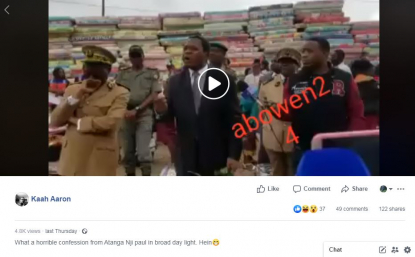 A screenshot taken on September 25, 2019 shows one of the misleading Facebook posts

“Atango finally confesses to his crimes,” read another. A third said it showed Atanga Nji confessing “for killing civilians”. The video clip is also circulating in French-language posts, including here  and here.

Some social media users correctly pointed out that Atanga Nji’s remarks had been cut short to make it look like he was issuing an apology. On Facebook, one user shared a link to a longer version of the speech which makes it clear that he is in fact demanding an apology from armed separatist groups. 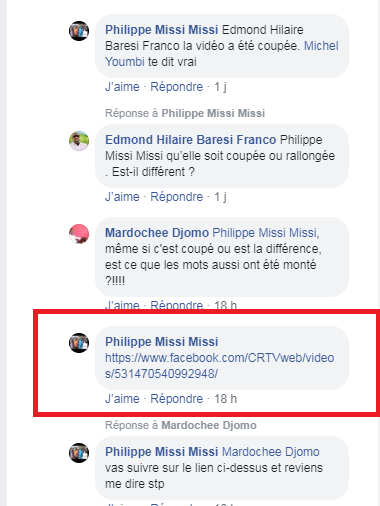 You can find this longer version of his speech, lasting one minute and 32 seconds, here on the Facebook page of national television station CRTV. This longer clip makes it clear that Atanga Nji is demanding an apology, not making one himself.

Here’s a transcript from the 50-second mark: “Those who are still in the bushes have the possibility to repent. And if you want to repent, then (President) Paul Biya is giving you this branch of peace. This branch of peace, that you should put down your weapons and talk to the local administrative authorities. The prime minister, the head of government was here (from May 10-12), he gave the same message: put down your weapons and go meet the local admin authorities. Tell them that, ‘I’m sorry for what I’ve done. I’m sorry to have killed innocent Cameroonians. I’m sorry to have raped young girls. I’m sorry to have committed atrocities. But God almighty, forgive me.’”

The misleading posts about his comments come at a time when the Cameroonian government is preparing for a “national dialogue,” starting next Monday, aimed at finding a way out of the crisis.

While several anglophone leaders have welcomed the initative, most separatists have indicated that they will not take part.

This video has circulated in reports since June 2018 about police assaulting a Hindu group in Aligarh, India