A photograph has been shared hundreds of times in Facebook, Twitter and Instagram posts with claims that it shows Nigerian movie star Funke Akindele Bello picking up waste in the street as a punishment for throwing a party during the COVID-19 lockdown. The claim is false; the photo was first published online long before the pandemic and shows a waste management officer.

The purported image of the Nollywood actress appears in several posts shared in Nigeria and Ghana, including this one posted by popular Ghanaian radio station Peace FM. It has garnered more than 2,000 comments since it was published on April 9, 2020. 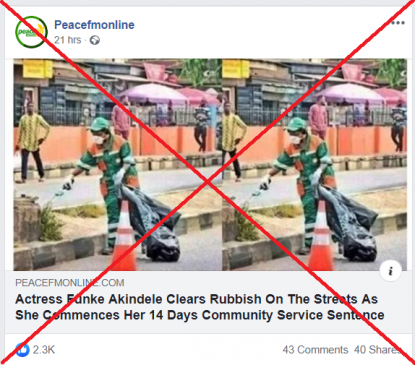 The post links to a publication on the radio station’s website,  headlined: "Actress Funke Akindele Clears Rubbish On The Streets As She Commences Her 14 Days Community Service Sentence". Many of the comments suggest viewers believed the claim to be true.

Akindele was sentenced to 14 days' community service on April 6, 2020, for hosting her husband’s birthday party at their Lagos residence, going against government rules on social distancing. The couple are the first to be tried under the new law to combat COVID-19, which has infected at least 158 people in Lagos, the epicentre of the pandemic in Nigeria.

Nollywood Actress, Funke Akindele Bello and her husband have been sentenced to 14 days Community Service in addition to a fine of N100,000 each, by Ogba Magistrate Court, for social distancing contravention@jidesanwoolu#LagosAgainstCovid19

Both Akindele and her husband Abdulrasheed Bello were fined 100,000 naira ($261) each and told to self-isolate for 14 days in addition to the community service, a Lagos court ruled.

Photo does not show actress

In Nigeria, the claim that the photograph of a woman collecting waste showed Akindele was published on “My State News”, a website that has previously been debunked by AFP here and here.

However, the photo has been circulating on social media since at least January 2018, nearly two years before the outbreak of the novel coronavirus pandemic.

A Google reverse image search for the photo led AFP to several versions of the image, including this earliest version posted on Twitter on January 12, 2020 by Cleaner Lagos, an initiative of the Lagos state ministry of environment.

The first batch of Community Sanitation Workers have commenced work in selected areas of Lagos state.

Under the Cleaner Lagos Initiative, 27,500 people will be employed as Community Sanitation Workers who will sweep the streets of Lagos. #CleanerLagos #CSWsOfLagos pic.twitter.com/KFPrf2VshS

There are no reports from major Nigerian news outlets that the movie star has begun her community service.

Lagos and Nigeria’s capital Abuja, as well as Ogun state, are on lockdown after Nigerian President Muhammadu Buhari on March 29, 2020, ordered the “cessation of all movement” to contain the coronavirus outbreak.