A screenshot of a web publication has been shared hundreds of times in multiple posts on Facebook, Twitter, and Instagram that claim the Nigeria Centre for Disease Control said it spent a billion naira ($2.78 million) on COVID-19 text message awareness campaign. However, this is false; the claim stemmed from a fabricated tweet, and was denied by Nigeria’s health authorities.

The screenshot appears in numerous Facebook posts, including this one published on April 8, 2020. It has been shared by more than 500 people on the social network.

The screenshot shows an online report headlined: “Breaking: We have spent 1B Naira on SMS just to educate Nigerians — NCDC”. NCDC refers to the Nigeria Centre for Disease Control, which is tasked with the prevention, detection, and control of disease outbreaks in Nigeria. 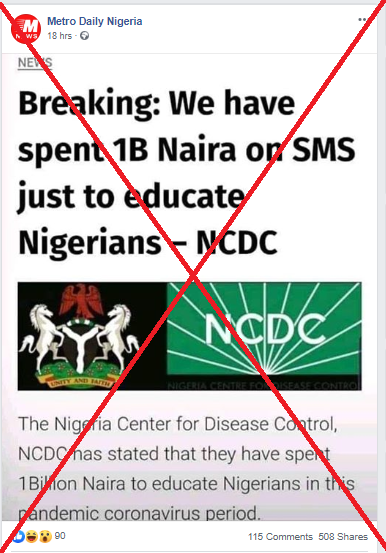 A Google search using keywords from the headline shows that the viral image comes from a story on the website “Reporters Press NG”. In it, writer Ikechi Micheal alleged that the NCDC made the disclosure in a tweet -- without mentioning the particular Twitter account. The story quotes the purported tweet as partly reading: “'One Billion Naira has been spent so for on SMS just to educate Nigerians (sic).'” 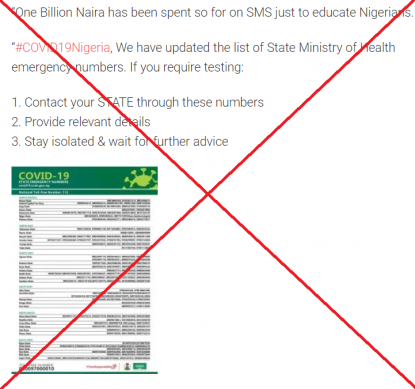 A different version of this story was found on this website called “My State News”. The website has a history of spreading misinformation, including a claim debunked by AFP here.

But the claim is false and based on a fabricated tweet created by merging a misleading statement with one of the NCDC's original tweets from April 8, 2020 (see below), which included a list of health emergency numbers across Nigeria’s states and federal capital Abuja.

#COVID19Nigeria
We have updated the list of State Ministry of Health emergency numbers. If you require testing:

There is no evidence that the NCDC made the claim. AFP went through the NCDC's Twitter account using Wayback Machine, a digital archive of internet content that takes regular snapshots of web pages, and found 363 archives of the NCDC Twitter feed since April 5, 2017.

The quote about the SMS campaign does not appear in the NCDC’s archived timelines, including some of the latest versions here and here. It does not appear on the NCDC's official Facebook page, either.

Moreover, the NCDC rejected the claim.

“The headline claiming that NCDC has spent N1 billion on SMS to Nigerians is FALSE,” it said in a tweet on its official Twitter account. “While communication through SMS is a key part of our #COVID19 response strategy, this has been largely provided as in-kind support by @AirtelNigeria @MTNNG @GloWorld.”

While communication through SMS is a key part of our #COVID19 response strategy, this has been largely provided as in-kind support by @AirtelNigeria @MTNNG @GloWorld

MTN Nigeria confirmed that it is indeed supporting the NCDC with free SMS service.

“We believe that the most important needs in this digital age is the ability to access reliable, validated information about the nature of the pandemic and how to protect yourselves,” MTN Nigeria’s Chief Corporate Services Officer Tobechukwu Okigbo told AFP in an email.

“This is why our partnership with the NCDC  includes a channel enabling the distribution of health information to all our subscribers as needed, and free access for subscribers seeking information from the NCDC through their toll-free lines or on the NCDC and Federal Ministry of Health websites.”

AFP also contacted the two other telecommunication companies mentioned but has not yet received a response.

Nigeria has confirmed at least 276 COVID-19 cases, including six deaths, as of April 9, 2020. The country has introduced a string of measures to contain the spread of the pandemic, including President Muhammadu Buhari declaring the “cessation of all movement” in the west African country’s two biggest cities -- Abuja and Lago -- and Ogun state.

AFP counts show that the NCDC has sent at least 12 text messages on COVID-19 preventive measures to Nigerians since the start of April. 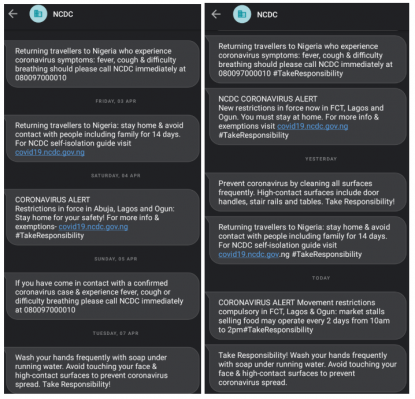