A story shared hundreds of times in multiple social media posts in Nigeria claims the country announced a 30,000 naira ($83) relief payout for citizens to help them through the novel coronavirus pandemic. But the claim is false; the government denied making any announcement of the sort, while the author of the story admitted he got it wrong.

The story was published on this website called “My State News” on March 27, 2020. It has since been shared nearly 2,000 times, including in this Facebook group with more than 128,000 members, according to CrowdTangle data.

Nigerian President Muhammadu Buhari’s spokesperson Femi Adesina is said to have confirmed the money would go to every Nigerian with a verified Bank Verification Number (BVN) account.

“I am sure the fund will go a long way to help Nigerians stock up their home during the stay at home order by the Government,” the story quotes Adesina as saying. 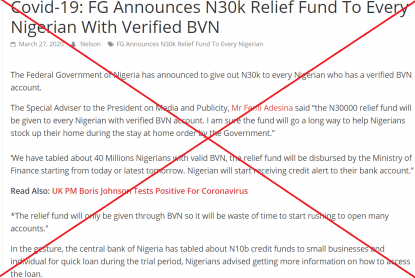 Screenshot of the misleading web publication, taken on March 31, 2020

The claim about purported cash handouts is not new in Nigeria. AFP recently debunked a similar claim that the government of Africa’s largest economy was planning to pay each citizen with a National Identification Number 8,500 naira ($23.60) monthly.

Both the previous debunk and the latest claim are false.

Adesina dismissed the statement credited to him. “Fake news peddlers have concocted a statement, purportedly issued by me, saying FG will pay N30,000 to each Nigerian with BVN, to help them stock up before an impending national lockdown. Not me. The so-called statement is hereby disclaimed,” he said in a tweet.

Fake news peddlers have concocted a statement, purportedly issued by me, saying FG will pay N30,000 to each Nigerian with BVN, to help them stock up before an impending national lockdown. Not me. The so-called statement is hereby disclaimed.

The Nigerian Presidency Office of Digital Engagement has also rubbished the claim, stating neither Adesina nor the government has made such an announcement. “Disregard mystatenews dot com & all other websites peddling this FAKE NEWS. And stop sharing it!” the office said in a tweet on its verified Twitter account.

Please note that the Federal Government is NOT paying or planning to pay N30,000 to every Nigerian with a verified BVN account

Disregard mystatenews dot com & all other websites peddling this FAKE NEWS. And stop sharing it!@FemAdesina did not say this; neither did @NigeriaGov! pic.twitter.com/vF2FgQyEKF

AFP ran some keyword searches on CrowdTangle and found the story was published on at least seven websites, including My State News, whose writer Omotimehin Nelson confirmed to AFP the story he wrote was wrong. “The story is false,” Nelson said in a phone interview.

Nigeria is home to the world’s largest population of people living in extreme poverty. And with Buhari’s directive on March 29 declaring the “cessation of all movement” in the west African country’s two biggest cities -- Abuja and Lagos -- and Ogun state to contain the coronavirus outbreak, the government has faced calls to provide citizens with cash handouts.

But on a more serious note, can't Nigerian govt @NigeriaGov pay some money into its citizens account with BVN data? This two weeks lock down ain't no joke. No plans for the common man, How do we survive bikkonu? ?@DONJAZZY @DrJoeAbah

However, Nigeria's humanitarian affairs and social development minister Sadiya Farouq said the government would provide "specialised social interventions" such as cash transfers, food rations, and a three-month repayment moratorium on existing intervention loans to cushion the effects of the lockdown on vulnerable groups in the affected states.

The cash transfers mentioned by Farouq are part of an existing and ongoing welfare programme intended to help the poorest of the poor.

“The stimulus package will contain bags of rice, beans, garri, bread, dry pepper, drinking water and vitamins,” he said in a Facebook post. “We want each ration to last for 14 days as we continue to evaluate the impact of #COVID19.”

Nigeria reported the first confirmed case of the novel coronavirus in sub-Saharan Africa on February 27, 2020. Since then, the figure has risen steadily to at least 151 cases including two deaths, as of April 1, 2020.