A couple wearing protective suits as a preventive measure against the COVID-19 coronavirus walk along a street in Wuhan in China's central Hubei province on March 31, 2020. (AFP / Noel Celis)

A post has been shared multiple times on Facebook in March 2020 that claims China and Japan are “free” of the novel coronavirus, which causes the disease COVID-19. The claim is false; data from the World Health Organization (WHO) shows new cases continue to be reported in both countries.

The post, written in a mix of Tagalog and English, reads: "Two countries are already FREE of COVID-19 / 1. China / 2. Japan / I'm sure the Philippines will be third in Jesus name". 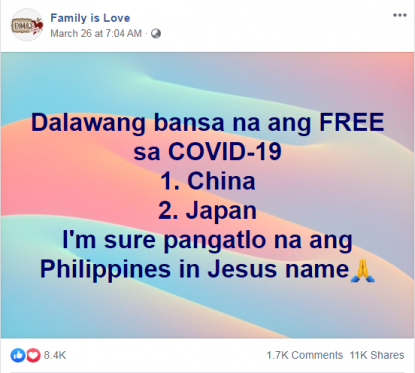 A similar claim has also been shared here, here, here and here on Facebook.

The claim is false; China and Japan have both reported new cases of COVID-19 in the days before and after the misleading posts were shared.

Below is a chart summarising the numbers of new cases reported during this timeframe:

Japan has postponed the Tokyo Olympics to July 23 next year due to the COVID-19 pandemic. Here is an AFP report on the announcement.