Skip to main content
A policeman stands guard at a roadblock during a government-imposed nationwide lockdown as a preventive measure against the spread of the novel coronavirus in New Delhi on April 9, 2020. (AFP / Jewel Samad)

A post has been shared multiple times on Facebook, WhatsApp and Twitter by India-based users alongside a claim that the World Health Organization (WHO) has issued guidelines on COVID-19 lockdown. This claim is false; both the WHO and Indian officials clarified that the "protocol" is fake.

The claim was published here on Facebook on April 5, 2020. 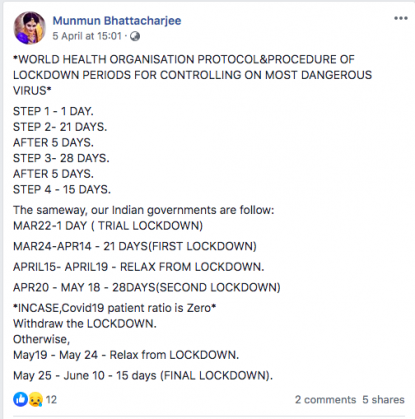 It goes on to describe a timeline when the Indian government is expected to follow the purported WHO guidelines, starting on March 22 and ending June 10.

According to the WHO’s April 13 report, at least 106,000 people have been killed by COVID-19 and nearly 1.7 million others have been infected worldwide.

In an effort to counter the COVID-19 crisis, India on March 24, 2020, announced a 21-day nationwide lockdown. Here is an AFP report on the government decision.

A WHO representative to India told AFP during a telephone conversation on April 5, 2020: “This is a fake advisory, WHO does not have any guidelines for a lockdown.”

The WHO's regional office for Southeast Asia also refuted the false claim in this tweet published on April 5, 2020.

Messages being circulated on social media as WHO protocol for lockdown are baseless and FAKE.
WHO does NOT have any protocols for lockdowns. @MoHFW_INDIA @PIB_India @UNinIndia

It reads:  “Messages being circulated on social media as WHO protocol for lockdown are baseless and fake. WHO does not have any protocols for lockdowns."

India’s state-run Press Information Bureau also issued this tweet on April 5, 2020, which shows a screenshot of the misleading post overlaid with a “FAKE!” stamp.

Claim : A so-called circular, said to be from WHO is floating around on whatsapp, saying that it has announced a lockdown schedule.

Fact : @WHO has already tweeted it as #Fake ⬇️https://t.co/GB7rQ0t9lJ pic.twitter.com/3M5RBLoA3i