Skip to main content
Italian President Sergio Mattarella leaves after giving an address at the Quirinale presidential palace in Rome on January 29, 2021, after a meeting with the Italian parties on forming a new government following the resignation of the prime minister. (AFP / Alessandra Tarantino)

A photo has been shared repeatedly in multiple posts on Facebook in March 2021 alongside a claim it shows Italian President Sergio Mattarella being arrested for "meddling" in the 2020 US Presidential election. The claim is false: the photo actually shows a former American military analyst being arrested during a protest in the state of Virginia in 2011. As of March 5, 2021, there have been no credible reports that Mattarella was arrested.

The photo was published here on Facebook on March 3, 2021. 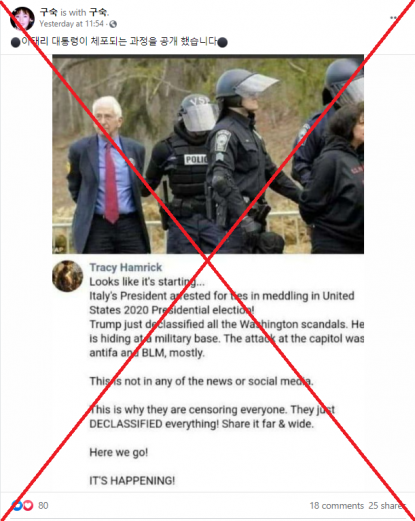 The post’s Korean-language caption translates to English as: "They disclosed the scene of the Italian President being arrested."

The English-language text overlay on the post's image reads in part: "Looks like it's starting... Italy's President arrested over ties in meddling in United States 2020 President election!"

The claim, however, is false. The man in the photo is former American military analyst Daniel Ellsberg.

The photo's caption reads in part: “Daniel Ellsberg, left, the former military analyst who in 1971 leaked the Pentagon Papers, is processed for arrest by a Virginia State troopers following his arrest after a Sunday afternoon, March 20, 2011, rally near the main gate of Marine Corps Base Quantico, Va.”

Below is a screenshot comparison of the photo shared in the misleading Facebook post (L) and the AP photo (R).

Ellsberg famously leaked thousands of documents half a century ago revealing that successive US administrations had lied to the public about the Vietnam war, AFP reported here.

He was one of more than 30 people arrested in March 2011 during a protest against the Iraq war, according to this Politico report published on March 21, 2011.

As of March 5, 2021, there were no credible reports or statements indicating that Italian President Sergio Mattarella had been arrested.

The latest update on the president's official website shows him in talks with the Vatican and Italian delegations at Palazzo Borromeo, Italy on the anniversary of the Lateran pacts and the Concordat's revision on March 2, 2021.

AFP Fact Check has previously debunked a similar claim that Mattarella was arrested.