A photo has been shared hundreds of times in multiple posts on Facebook alongside a claim it shows a rocket attack on the US embassy in the Iraqi capital, Baghdad in January 2020. The claim is false; the image actually shows a US army helicopter dropping flares over Baghdad’s high-security Green Zone in December 2019 after Iraqis breached the outer wall of the US embassy.

The image was published here on Facebook on January 5, 2020. It has been shared almost 250 times.

The photo’s caption reads: “BREAKING !!! JUST IN: US us embassy in Baghdad comes under rocket attack in WW3 fears. 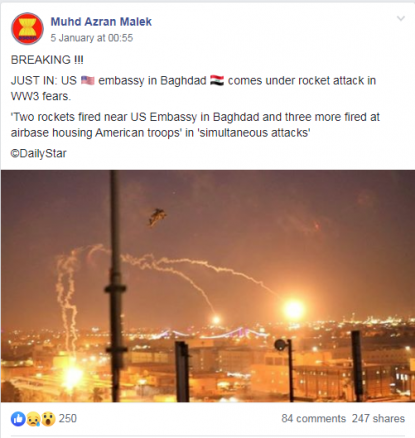 The same image was published with a similar claim on Facebook here, here and here, where it has been shared nearly 300 times.

Two mortar rounds hit Baghdad’s Green Zone, the high-security enclave where the US embassy is based, and two rockets slammed into a base housing US troops on January 4, 2020, one day after an American drone strike killed Iranian commander Qasem Soleimani outside the Baghdad airport, AFP reported here.

The claim in the misleading posts is false; the photo actually shows a US army helicopter dropping flares over the Green Zone on December 31, 2019, in reaction to Iraqis breaching the outer wall of the US embassy.

A reverse image search on Google followed by a keyword search found this photo on the AFP Forum dated December 31, 2019.

Below is a screenshot of the photo on AFP’s website: 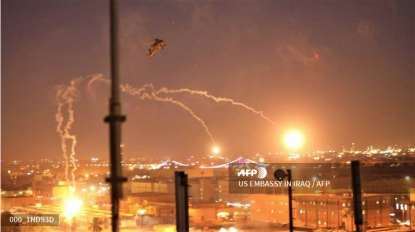 The photo’s caption reads: “A handout picture received from the US embassy in Iraq on December 31, 2019, shows a US army apache helicopter dropping flares over Baghdad's high-security Green Zone on December 31, 2019, after Iraqi supporters of pro-Iran factions breached the outer wall of the US embassy over weekend air strikes that killed pro-Iran fighters in western Iraq. The US State Department said that embassy personnel are safe and there are no plans to evacuate, after Iraqi supporters of pro-Iran factions attacked the compound. It is the first time in years that protesters have been able to reach the building, sheltered behind a series of checkpoints in the high-security Green Zone.”

Below is a screenshot comparison between the image in the misleading post (L) and the photo on AFP’s website (R):

Pro-Iran Iraqi demonstrators besieged the US embassy in Baghdad on December 31, 2019, in a protest against American air attacks on an Iran-backed militia group in Iraq and Syria, as reported by Al Jazeera here.