An old claim is recirculating on Facebook in a post which asserts that two fruits – mangosteen and soursop – can cure cancer and that coconut water can be used as an emergency substitute for plasma. These claims are misleading; scientists say there is not enough reliable evidence to show that mangosteen and soursop are effective cancer remedies and doctors maintain that coconut water is not identical to human plasma and therefore should not be used as an alternative.

The infographic reads: “Coconut water not only is sterile, but has the same electrolytic balance as human blood which enabled medics in the Pacific Theater in World War II to use it as an emergency substitute for plasma.

“Mangosteen can cause cell death in leukemia cells.

These claims, however, are misleading and not supported by scientists and health professionals.

It is widely averred by doctors and medical professionals that coconut water is not an effective alternative to plasma.

“The idea that coconut water has the same electrolyte balance as human blood is not correct," Dr. Rosemary Stanton, a Visiting Fellow of the School of Medical Sciences from the University of New South Wales, told AFP in an email on January 7, 2020.

Stanton stated that intravenous fluids are "designed to have high sodium and low potassium – like plasma," yet coconut water "has about a fortieth the sodium level of plasma, and a potassium level that is 10-15 times higher." 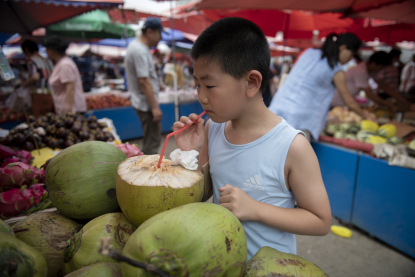 “Coconut water could certainly be given orally to treat dehydration," she said. “My conclusion is that coconut water is a refreshing drink and should be treated as such.”

This article published by Australian public broadcaster ABC also notes that coconut water is not the same as plasma.

Plasma in blood "is a clear slightly yellowish liquid, with high levels of sodium, low levels of potassium, and trace amounts of other minerals. Genuine intravenous fluids are manufactured to have high sodium and low potassium," the report explains.

“Coconut water is not identical to the plasma. Instead, it is closer to the liquid inside the red blood cells, with low sodium and high potassium - the exact opposite.”

Scientists say that while mangosteen has numerous health benefits and medicinal uses, there is not enough evidence to show that the fruit would be an effective cancer treatment for humans.

“Other studies have shown that mangosteen can inhibit the growth of various types of cancer cells. There is also evidence that some compounds in mangosteen act as free-radical scavengers to prevent damage by low density lipoprotein (LDL), more commonly known as bad cholesterol. However, it is not known at the present time if the same effects occur in the human body," the Memorial Sloan Kettering Cancer Center notes here.

Simon Yeung, a doctor of pharmacy and a professionally trained herbalist with Memorial Sloan Kettering Cancer Center, wrote in another study on mangosteen that while "in vitro and animal studies revealed that it has antioxidant, antiinflammatory, and antiproliferative effects against cancer cells," the fruit is "yet to be studied in humans."

"Cancer patients should use caution before consuming mangosteen products as they can potentially interact with cancer treatments and also affect blood sugar levels," Yeung stated.

Experts also say there is insufficient evidence to show that soursop, also known as graviola, can effectively fight cancer.

"Gin kills cancer cells in a test tube -- it doesn't imply that cancer patients should go out for a Martini!"

“While research suggests soursop can fight cancer, it has not been studied in humans. As a result, there is no evidence of its safety or efficacy,” the non-profit Cancer Treatment Centers of America states in this article published on July 13, 2017.

The Cancer Research UK charity also states in an article here that “There is not enough reliable evidence that graviola works as a treatment for cancer.”

The report goes on to warn that consuming soursop may have negative side effects, which include "nerve changes and movement disorders" and "damage to your kidneys and liver if taken frequently."

Dr. Raymond Chang, a Hong Kong-born, New York-based cancer specialist and author of Beyond the Magic Bullet: The Anti-Cancer Cocktail, dismissed the claims about mangosteen and soursop curing cancer.

“There are rampant irresponsible (or ignorance generated) claims that certain foods or supplements 'kill' cancer, and these are usually a marketing ploy to sell the same items,” he said in an email to AFP on December 17, 2019.

Chang added that most research on the fruits' effects on cancer cells is "based on test tube studies" that "have limited value."

“In short, many things kill cancer in a test tube; for example chlorox, acid, vinegar, chili pepper. But a test tube experiment doesn’t imply that it works in a person!" Chang concluded.