A photo is being shared on Twitter alongside a claim that it shows Tanzanian member of parliament Hamisi Kigwangalla meeting Microsoft founder and billionaire philanthropist Bill Gates. The claim is false; the photo was taken in Tel Aviv, Israel in 2019 when the Tanzanian politician met Shlomo Carmel, a former member of the elite Israeli paratroopers who rescued over 100 hostages held at Uganda’s Entebbe airport in 1976. 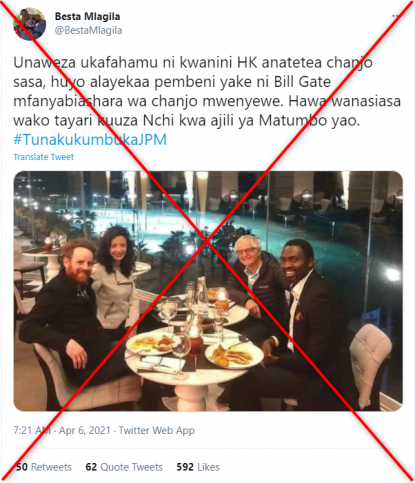 The tweet, published in Swahili, translates to English as: “You can understand why HK (Hamisi Kigwangalla) is in the frontline urging Tanzanians to get vaccinated, the person seated next to him in this photo is Bill Gates, a vaccine trader. These politicians are ready to sell the country for their stomachs.”

Kigwangalla is the current MP for Nzega Rural constituency in Tanzania and previously served as the minister for Natural Resources and Tourism in the country from 2017 to 2020.

The tweet implies that Kigwangalla, who has been urging Tanzanians to get vaccinated against Covid-19, is motivated by his purported closeness with Bill Gates.

Through his nonprofit, the Bill & Melinda Gates Foundation, Gates has been at the forefront of vaccine development, working closely with pharmaceutical organisations and other stakeholders to help bring Covid-19 vaccines to developing countries.

Gates not in the photo

The photo does not show the Tanzanian politician meeting Bill Gates.

A Google reverse image search revealed that the photo shows MP Kigwangalla meeting former Israeli paratrooper Shlomo Carmel in 2019 in Tel Aviv Israel. The photo was posted by the Tanzanian embassy in Israel on its official website.

In the post, the Tanzanian embassy wrote that Carmel was discussing tourism matters with Kigwangalla.

At the time, Kigwangalla was Tanzania’s minister for Natural Resources and Tourism.

Carmel, a former member of the elite Israeli paratroopers who rescued over 100 hostages held at Uganda’s Entebbe airport in 1976, is the founder of Another World Geo Ltd, a travel company based in Israel that he started in 1995.

Carmel is a guide and travel veteran with extensive knowledge of the African tourism industry.

A side-by-side comparison with an earlier photo of Carmel, taken by AFP photographer Ronald Kabuubi in June 2016, shows that the man seated next to the Tanzanian politician is indeed Carmel -- and not Bill Gates.

Side by side comparison of the photo from Tel Aviv in 2019 (L) and the AFP image from 2016 (R), which both show Shlomo Carmel

The late Tanzania president John Magufuli repeatedly denied the existence of Covid-19 in the country.

However, the attitude has shifted with Tanzania’s new president. On April 6, 2021, President Samia Suluhu Hassan was quoted saying that it was “not proper to ignore” Covid-19.

Hassan said that she would create an expert Covid-19 taskforce that would advise the government on how to handle the pandemic.