Images purporting to show former US Secretary of State Hillary Clinton detained in Guantanamo Bay have been widely shared by social media users. But the images have been doctored to digitally insert Clinton into unrelated photos. No credible news reports indicate she was detained at Guantanamo Bay as of May 3, 2021. 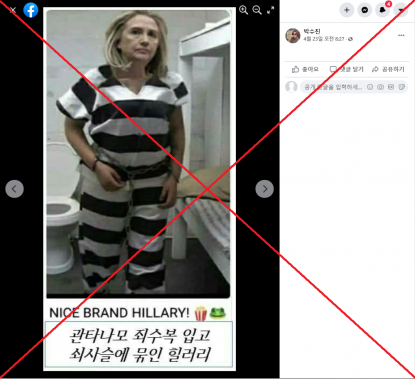 Screenshot of the doctored photo on Facebook. Captured April 29, 2021.

The image is overlaid with a combination of English and Korean-language text that reads: “Nice brand Hillary! Hillary tied up in chains, wearing a Guantanamo prison uniform.”

The Guantanamo Bay detention camp is a US facility located in southeastern Cuba. It has been the subject of a global controversy over alleged violations of the legal rights of its detainees.

An identical image was shared alongside a similar claim here on Facebook; here on Twitter; here on Naver Band; and here on Ilbe, an online forum associated with far-right movements in South Korea.

A reverse search on TinEye found the original photograph was posted here on the image-sharing website Flickr on June 19, 2012.

An image of Clinton has been digitally added to the original photograph.

Below is a screenshot comparison between the doctored image (L) and the original image from Flickr (R) with matching features circled in red by AFP: 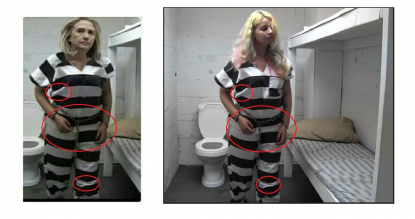 Screenshot comparison of the doctored image (L), and the original image from Flickr (R).

Multiple keyword searches on Google found no reliable government or media reports that indicate Clinton has been detained at Guantanamo as of May 3, 2021.

Another doctored photo of Clinton was shared alongside a similar claim in Chinese videos YouTube here and here.

It includes an image that purports to show Clinton being escorted to a prison cell, as shown below: 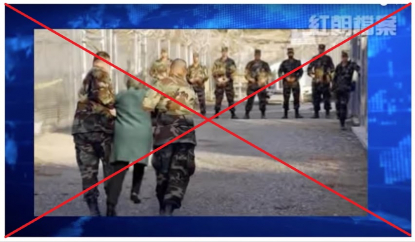 A screenshot of the misleading photo included in the YouTube video

The image, however, has also been manipulated.

A reverse image search on Google found this photo captured by the US Department of Defense published in 2002.

It was captioned: “In this photo released 18 January 2002 by the Department of Defense, U.S. Army military police escort a detainee to his cell in Camp X-Ray at the US Naval Base at Guantanamo Bay, Cuba during in-processing to the temporary detention facility 11 January 2002. Al-Qaeda and Taliban detainees captured in Afghanistan during Operation Enduring Freedom are given a basic physical exam by a doctor, to include a chest x-ray blood samples drawn to assess their health.”

Below is a screenshot comparison of the photo in the YouTube video (L) and the 2002 photo (R):

A screenshot comparison of the photo in the YouTube video and AFP photo.

The detainee pictured wearing an orange prison uniform was replaced with an image of Clinton that was originally published by Reuters here in 2016.

It was captioned: “U.S. Democratic presidential candidate Hillary Clinton (in green coat, back to camera) loses her balance briefly as she arrives for a tour of SC STRONG, a home for ex-offenders and substance abusers on the grounds of the former Charleston Navy Yard in North Charleston, South Carolina February 24, 2016.”