The photo collage was published here on Twitter on October 2, 2020. It has been retweeted more than 320 times.

The first image shows a clean body of water. The text superimposed on the image reads: “Vanuatu”.

The second image shows a polluted waterway with text that reads: “Jakarta, Indonesia”. 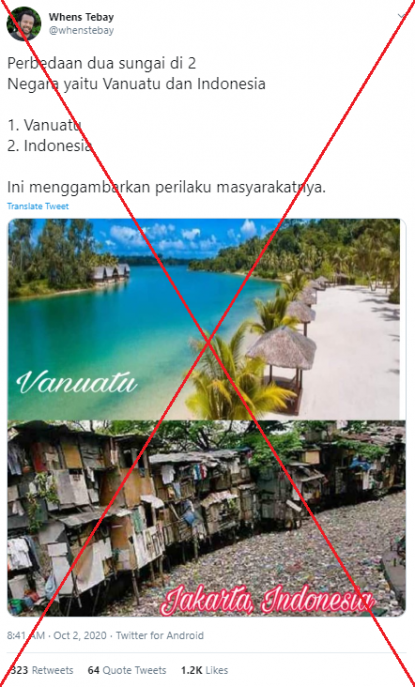 The Indonesian language tweet translates to English as: “The difference between two rivers in 2 countries, namely Vanuatu and Indonesia
1. Vanuatu
2. Indonesia

“This describes the behaviour of their people.”

The photo collage was also been shared on Facebook here and here with a similar claim.

Below is a screenshot comparison of the first image in the misleading post (L) and the Holiday Inn photo (R):

The photo matches with this Google user's image tagged at the resort's location on Google Maps dated April 2017.

A reverse image search followed by keyword searches on Google found the second picture is an EPA photo of Manila, taken on March 1, 2009.

Screenshot of the EPA photo

The photo’s title reads: “A Filipino girl living on shanties walks along a polluted creek in Manila.”

The caption reads: “A polluted creek covered with trash in Manila, Philippines on 01 March 2009. The Department of Environment and Natural Resources reported in 2008 that the Philippines hosts 50 major polluted rivers, with a majority of pollutants coming from domestic waste.”

Below is a screenshot comparison of the second picture in the misleading post (L) and the EPA photo (R):