Skip to main content
Police officers stand guard during China's National Day in Hong Kong on October 1, 2020, which commemorates the 71st anniversary of the establishment of the People's Republic of China. (AFP / May James)

An image has been shared hundreds of times in multiple Twitter posts that purports to show a Chinese political slogan coined by Communist China's founding father Mao Zedong in an advert for the Hong Kong police force. The posts claim the slogan "started to appear in Hong Kong". The image, however, has been doctored; as of October 5, 2020, the real Hong Kong police poster displays a recruitment message that reads; "If you want to uphold the rule of law".

The image was published on Twitter here on October 5, 2020. It has been retweeted more than 400 times. 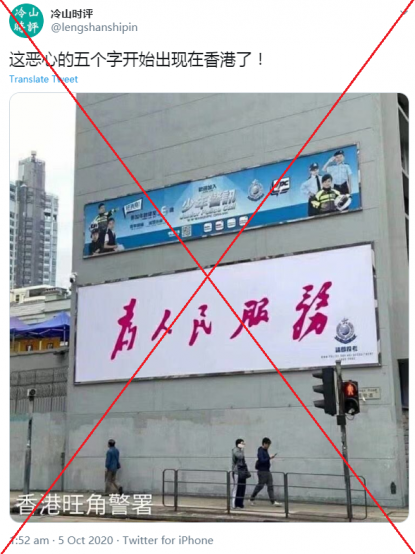 Screenshot taken on October 6, 2020, of the misleading Twitter image

A blue advert for the Hong Kong police force can be seen at the top of the image.

A white poster underneath it bears red traditional Chinese text that translates to English as: “Serving the People”. In the poster's bottom right-hand corner, a logo for the Hong Kong police force can be seen.

“Serving the People” is a political expression that was coined in a 1944 speech by Chairman Mao Zedong, the founding father of the People’s Republic of China. Mao’s calligraphy work with the slogan has also been widely shared.

The post circulated after Beijing enacted a controversial national security law in Hong Kong on June 30, 2020. Hong Kong police have been using the past words and deeds of government critics to bolster investigations under the sweeping new law, despite the legislation not being retroactive, AFP reported here.

The image was also shared alongside a similar claim in October 2020 on Twitter here and here.

In response to the misleading posts, a spokesperson for Hong Kong Police said the image was not authentic.

“The banner from this image is not real,” the spokesperson told AFP by phone on October 5, 2020.

On October 5, 2020, the same day the manipulated photo was shared in social media posts, AFP obtained a photo of the same banner located on the external wall of Mong Kok police station. 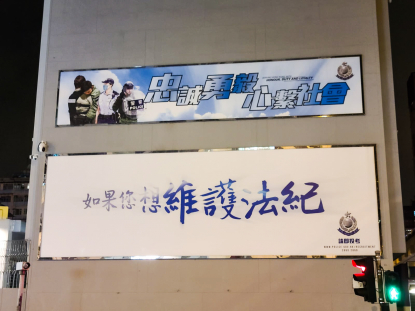 The traditional Chinese-language text on the banner reads: “If you want to uphold the rule of law." The text in the bottom right-hand corner under the Hong Kong police logo reads: "Please submit an application immediately”.